Bruins Win, But Shouldn't Be Happy 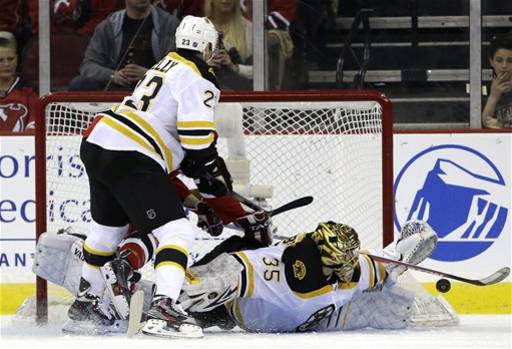 This team really pisses me off sometimes. They get a few bounces, make a few plays, and find themselves up 4-0. And that's when you get nervous. Because this team tries to run the clock out. They let the Devils back into this game, and that's just too bad. They lose Brad Marchand to an elbow to the head, get a 5 minute Power Play, then fail to get a shot on goal, and allow one in their own end.

It's the same on/off switch crap with this team. I'm tired of seeing Milan Lucic cruising around like it's an open skate. I'm tired of forwards that don't move in the neutral zone to help the defensemen break out. I'm tired of seeing Julien forced to put Jordan Caron on the ice in a Power Play because Lucic and Nathan Horton are lollygagging.

This team now sits in first place in their division. And that's great. But after a game like this it's difficult to be happy. The Bruins had this game in the palm of their hands, and they nearly dropped it. One unfortunate bounce in the last 37 seconds and they might have lost a point.

And the Devils aren't an elite opponent. They're a borderline playoff team, struggling through injuries.