I Want the Maple Leafs to Get Luongo, So All My Least Favorite Players Are on One Team 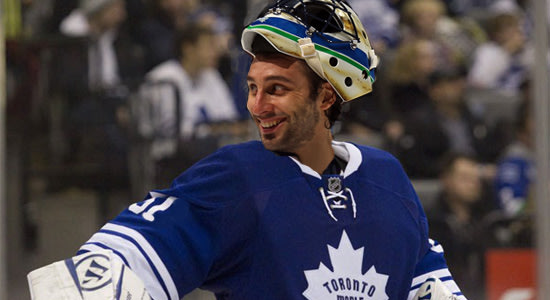 It's Deadline Day in the NHL. And I want the Canucks to trade Roberto Luongo to the Toronto Maple Leafs. I hate Luongo. He's an overrated, whiny, douche. He's perfect for the Maple Leafs, who already have two of my least favorite players in the game.

Toronto already has Phil Kessel, who is more popular in Boston as a Maple Leaf than he ever was as a Bruin for three reasons: 1. He's the reason we have Tyler Seguin here, 2. ditto Dougie Hamilton, and 3. he's the reason HE is no longer here. He played his own way, wasn't tough, was an incomplete player, and he was greedy.

And playing for the Leafs' AHL affiliate is Mike Komisarek, former nemesis of Milan Lucic. This guy, when playing in Montreal, epitomized all that is wrong with Canadiens hockey. He would typically only get tough when guys like Lucic were safely restrained on the bench. And when Komisarek did actually grow a pair and throwdown, he'd get thrown down.

So if the Leafs acquire Luongo, it will make it easy and convenient for Bruins fans to find their most hated players all in one place. Then the Leafs can sign Matt Cooke and PK Subban to make the team's douchebaggery complete.