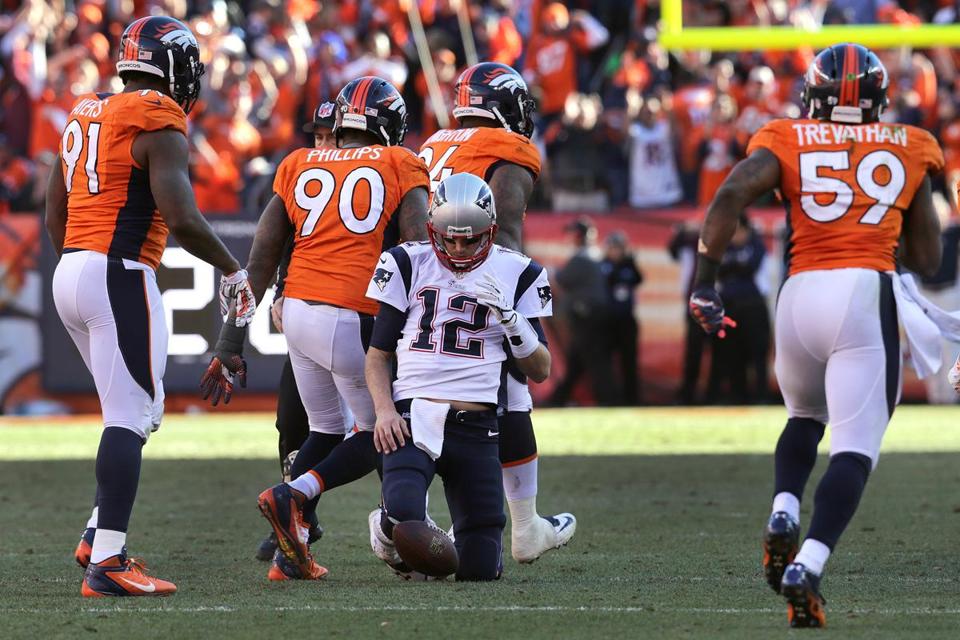 Tom Brady needs more and better tools. By the same token, Brady needs to do his job with those tools. Brady didn't do his job this season. The Patriots should give Brady better pass catchers for next season, but Brady must throw better than he did this season.

The Patriots need more and better targets for Brady. That's obvious. Last year they planned/hoped to have Rob Gronkowski, Aaron Hernandez, Danny Amendola, Julian Edelman, and long shot rookies Kenbrell Thompkins and Aaron Dobson. Those plans fell apart due to arrests and injuries. The Patriots' season ended with Austin Collie as the second most effective receiver on the field, Michael Hoomanawanui being targeted multiple times, and Matthew Slater being thrown to for the first time all year. That's just not good enough.

There's a wealth of talent on the wide receiver market. And size. The Patriots need to look for size. Size matters.

The Patriots need receivers that are matchup problems for opponents. As effective as Edelman is and as a healthy Amendola can be, they don't give defenses headaches. They are who they are and covering them is pretty straightforward. When someone like Gronkowski is on the field, however, the defense is forced to focus on playing against him. That leads to opportunities for everyone else. And Brady is a master at exploiting those mismatches. Guys like Gronkowski bring their own production and also boost the production of others. The Pats need another guy like that.

Which is why the Pats need a big, strong receiver. It will make everyone more productive because defenses will be forced to adjust to the threat. And then you're also no longer overly dependent on a tight-end who is playing physical on every snap, especially on running plays. Gronk was targeted 67 times in his 7 games. He caught 39 passes. Most of those in tight coverage, most of those plays ending with gang tackles or hard shots to his legs. The less wear and tear on him, the better.

I think Aaron Dobson works as a simple, vertical player. Obviously Edelman excels at the underneath stuff. Amendola is serviceable so long as he gets favorable matchups. And he'll get those matchups if the Patriots get that power receiver. And then Edelman will find gaps in coverage. And Dobson will sometimes find himself in a favorable one-on-one matchup on the outside and get open for deep bombs. Defenses will be forced to worry about underneath, over the top, up the seams, on the sides, guys like Shane Vereen coming out of the backfield, and of course the run. Matchup difficulties, baby. Give the defensive coordinator a migraine.

Getting a big receiver helps Brady and the offense so much. The thing is, Brady must help them back. "Do Your Job," became a Patriot mantra this season and at times Brady didn't do his job. His job is to find open receivers and send them the ball. His job was sometimes more difficult because of what he had to work with. But how many times did we see him completely miss open receivers?

The poor throws to Edelman and Collie against the Broncos were the latest examples. I've heard the argument/complaint/excuse that "Brady had to be perfect this season," but he didn't. He just had to make one more good throw to Edelman. Then the game changes. An abstract part of Brady's job is to change the game. He's paid to be a game-changer. He didn't do any game changing against Denver.

Just think about how much flak Edelman would have gotten if he dropped a well-thrown pass there. Edelman's job is to catch, Brady's is to throw catchable balls. Who did their job with more consistency this season?

Such missed throws were not a rarity for Brady in 2013.

Remember the non-pass interference call against Carolina? That ball was deemed uncatchable because it wasn't near Gronkowski. It was underthrown. Brady threw low and short to a 6' 7" tight-end. The officiating became the story, but if Brady throws a better ball then maybe Gronk makes a catch or the refs call the penalty. Who had more impact on Gronk's inability to make a play on that ball: Luke Kuechly or Tom Brady?

I'm not trying to saddle everything on Brady. He's one of the best ever and still one of the best in the NFL. Even as he ages, his mind remains sharp, and when he makes the throws it's truly a thing of beauty. I'm blaming his play. It wasn't good enough. He didn't do his job enough. Personally I think he played a significant part of the season with an injury, and not to his hand. Regardless of the cause of his play, he must play better to take advantage of any new weapons the Patriots give him.

You can give a man the best guns and ammo on the planet. But if he misses the target, what's the point?

If the Patriots give him tools, Brady has to do his job.