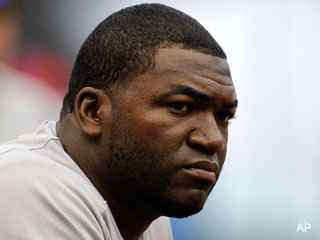 Sometimes the media makes mountains out of molehills. They take a small story, ramp it up, and turn it into a big deal. It happens in sports, politics, celebrity news, the media does it everywhere. In sports, if the story lasts 48+ hours the media deems it a "distraction." They declare that the story, which the media created/enhanced in the first place, is "taking away" from something more important. This keeps the story alive and makes it an even bigger story. Normally, this vicious cycle irritates me.

David Ortiz is not a victim of this cycle. He's the instigator. He took the molehill and started to build it into a mountain.. Ortiz couldn't leave his disagreement with Bob Ellis (who charged Joe Mauer with an error instead of rewarding David Ortiz with a hit) on the field, where it belongs. Because in Ortiz's mind, it's just the latest example of him being a victim.

But moving on from a perceived slight is not what David Ortiz does. Here's what he said:

"We tie the game. We win the game. It doesn't get any better. But I want my hit back anyway... It’s always so hard here, man. I tell you. People are supposed to have your back at home. It never happens. It's always like that. I've been here more than a decade and the scorekeepers here are always horrible. This is home, man... I always look like I am the bad guy but they always end up changing it. Don't just be checking on Papi. Check on the scorekeeper. See what he's doing wrong. It's something that, it’s getting out of control. What is he watching? He’s not watching the same ballgame that everybody is watching, I guess. I got to make it clear. It's not my first rodeo, man. You know how hard it is to get a hit, man?"


The assembled media then laughed at his "rodeo" joke. None of the media asked the question that should have been asked: "Why is this such a big deal? Why care so much about it?"

Ortiz also has a history of being overly sensitive whenever criticized or questioned. Or as he might see it, many people are out to get him and he needs to fight these conspiring forced in order to survive in Major League Baseball.

I don't care so much about Ortiz disagreeing with the official scorer, it's how he does it. A few years ago when he poked his head into the manager's press conference as the team was collapsing to complain about losing an RBI, it was like a crewman on the Hindenburg complaining about his paycheck to the captain as the airship was crashing and burning.

On Thursday Ortiz voiced his disagreement during the game. Later when the media came asking questions, Ortiz wanted to use them as a voice of his victimhood. "It's getting out of control." "It's always so hard here." "People are supposed to have your back at home. It never happens." "The scorekeepers here are always horrible."

"I always look like I am the bad guy but they always end up changing it." Translation: I cry, then I get my way.

I'm not going to exaggerate and say this is a big deal, or a distraction, or a bad example for younger players. It's an annoyance. And what's so annoying about it is that it could be avoided if David Ortiz just kept himself from trying to use the media to portray himself as a victim.

Ortiz's whining changes the conversation. Instead of discussing whether it's a hit or an error, the discussion becomes about Ortiz and his reaction. Ortiz is not the victim, he's the perpetrator, he's the creator of this story.