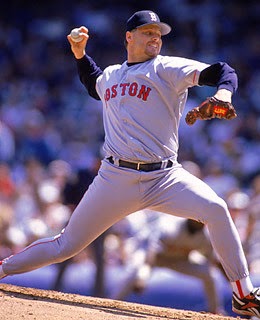 I really don't care that Roger Clemens took PEDs. It shouldn't exclude him from Cooperstown eligibility. And I'm glad the Red Sox don't care about that issue with their own Hall of Fame (perhaps the Sox are thinking down the road when they want to induct David Ortiz into their HOF). Cheating was accepted by writers, owners, fans, and players when Clemens pitched. It's hypocritical and unethical for that same cheating to now be judged by the same people who let it go unchecked for years.

Roger Clemens is one of the best Red Sox pitchers of all-time. That's not saying too much. From 1920 to 1997, the Red Sox didn't have many all-time great pitchers. Jim Longborg won the Cy Young in 1966, and until Clemens came along, he was the only Red Sox pitcher to win the award. Luis Tiant had a few great years. Lefty Grove was an all-time great. Other than that, Clemens was the first HOF caliber pitcher the Sox had in decades.

But let's not forget that Clemens was a lot like Josh Beckett before Beckett was out of high school. Roger let himself go. He showed up to Spring Training out of shape. He'd get hurt. He was 10-5 on a 1995 team that won the AL East. He was 10-13 the next year. His years as an Ace seemed behind him. After all, at 34 years old, how could anyone expect him to get better?

If you look at the dip in his performance and fitness from 1993 to 1996, when he's entering his 30s, and then compare it to his resurgence from 1997 to 2006 when he's in his late 30s and early 40s, it's pretty obvious something dramatic changed about his physical fitness regimen.

Why didn't he make that change in Boston, though? Why did he wait until he was with Toronto to start juicing?

Imagine what the 1998 Red Sox could have done with Pedro Martinez and a roided up Roger Clemens?

I will always hate Roger Clemens because he didn't try here. He got lazy, got sloppy, and he didn't give 100% until he left here.