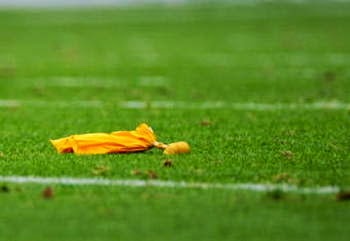 Friday night's Patriots pre-season game against the Eagles saw 28 flags. To put that in perspective, if officials threw state flags instead of yellow ones, starting with Alabama and throwing the flags in alphabetical order, they would have gotten to Nevada. Speaking of Nevada, how long until there is an over/under Vegas line on flags thrown in games?

The big question is, will the regular season be officiated so tightly? And a follow up to that is, what health risks will NFL officials face if they call penalties as frequently as they have in the pre-season?

Arm fatigue and rotator cuff injuries
Obviously the act of throwing flags will cause significant wear and tear on officials' arms. And don't forget all the gestures and signals officials make with their hands and arms. The illegal contact motion could cause severe strain on the triceps.

Don't be surprised if several NFL officials require Tommy John surgery before the season is over.

Carpal tunnel syndrome
Especially for the head referee, who has to switch his microphone on and off to explain penalties. All that repetitive clicking with the thumb and forefinger will take its toll.

Laryngitis
The refs making announcements are most vulnerable to this, especially the ones who explain calls in detail. Ed Hochuli's arms might be strong enough to endure throwing all those flags, but will his pipes be able to endure explaining all of them? By November and December, refs will be hoarse, and some will have to refrain from talking as their voice boxes deteriorate.

Lower back pain
Flags thrown need to be picked up. That requires bending over. Lift from the knees, refs.

Eardrum damage
Thousands of fans booing coupled with at least one irate coach on the sideline screaming into the ear of some poor line judge. That's going to do some serious damage to the eardrum.

Mental and nervous breakdowns
I can imagine an NFL official on his day off at home watching his kids play, then one kid slightly nudges another, and when the ref reaches for a yellow flag in his belt and finds nothing there, PANIC. Refs will grow so accustomed to throwing flags at the slightest hint of contact between two other human beings, that when they're at home or at their Monday-Friday jobs, they'll have no idea what to do without that flag.

And how many times can you say "illegal contact, hands to the face," until the words lose all meaning? And then you wonder if any words had any meaning? And if words don't have meaning, do thoughts? And if thoughts have no meaning, do people? Then you fall into a catatonic state and they commit you.

At least one official will be committed to a mental institution before week 10.

All joking aside, the penalties are too much. The games are already too long, too riddled with stoppages. I'll still watch every Patriots game, of course. I think my watching of neutral games will go down. Especially the usually mediocre Thursday Night Football matchups.

Maybe NFL Network could start a YellowZone. Every flag from every game. #QuadBox.