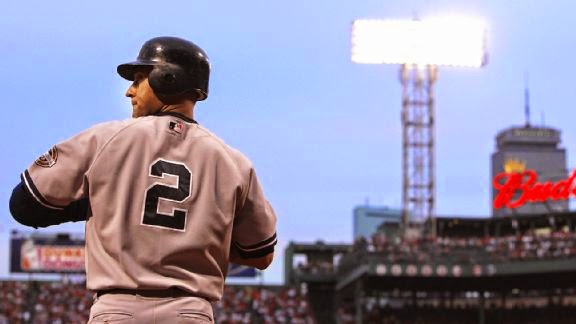 If you're sick of all the Derek Jeter stuff, don't worry, it will all be over soon. I'll agree that maybe it is a little 2 much, and some people are laying the praise on 2 thickly, and maybe Jeter waited 2 long 2 retire. But before the circus is over, the Yankees will come to Fenway, and Derek Jeter will make his last trip to Boston wearing the uniform of the enemy.

He'll probably be cheered. But how cool would it be if he got booed? I think booing him would be the greatest tribute Sox fans could give to him. Not a boo with any malice behind it, more of a funny boo. Like how Fenway fans applauded Mariano Rivera in 2005 when the Sox were getting their World Series rings.

One last boo from Boston for their respected nemesis.

I have a Derek Jeter story to share. It was the early 2000s, I don't remember the exact year. It was during that painful stretch when the Yankees were relentlessly superior to the Sox every season. They were rolling to the World Series every year, our team was feebly reaching for the Wild Card, and annually falling short.

I was in high school. I went to Fenway for the first Yankees series of the year. That was a tradition of mine. Back then it wasn't absurdly expensive, because back then Fenway still had the feel of a 90-year old dump built on top of a swamp. Fenway was not the cool place to go, it was a cold place to go. It wasn't family friendly, it wasn't fan friendly. The building itself and all the staff seemed to not want people to come to the game. Everyone was angry, miserable, drunk, rowdy. Comparing Fenway in 2000 to Fenway in 2014 is like comparing the Wild West of the 1800s to a strip mall in modern Glendale, Arizona. Same place, different people, more amenities in the present, more "character" in the past.

The Yankees were taking batting practice. I was standing behind the first base dugout. Derek Jeter took his swings. After a barrage of low opposite field line drives, he trotted down to first. He stood on the bag, and practiced his standing leads and running leads, going through a baserunner's routine of leads and retreats to the bag.

Maybe I had a few drinks working through my system, maybe I didn't. Maybe it was those possible drinks, or maybe it was seeing his overly confident trot to first base, or a combination of both. Something stirred in me. I felt a buzz of hatred, of jealousy, of a whole jumble of emotions all at once.

And I started to yell. I can't remember what exactly I said. But it was loud, and sarcastic. Then I went into the "Nomah's Bettah!" chant.

Keep in mind, this was back when Nomar was still on the Red Sox, and back when there was still a legitimate argument about who was the best short-stop in baseball. In Boston, there was no argument.

At the top of my lungs I screamed "NOMAH'S BETTAH!" clap, clap, clap clap clap. Others around started to clap along with me.

Jeter stopped his routine on first base, and looked at me.

"NOMAH'S BETTAH!" clap, clap, clap clap clap. And Jeter clapped along with me.

I had no idea what to do then. I was baffled. Looking back it was an ingenious response to a heckler.

I yelled out a promise to him, that because he clapped along with me, I wouldn't boo him that night. And I didn't. And if memory serves he got an RBI or two in the game. And I couldn't boo him. The next night I booed him as hard as I could.

And that's my Derek Jeter story.