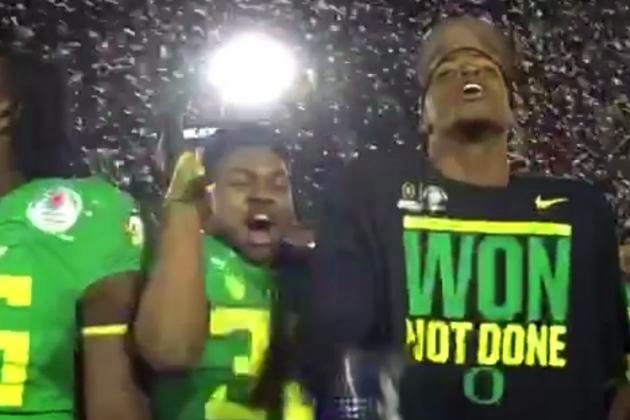 You shouldn't make light or fun of something as heavy and serious as rape accusations.

After Nike's corporate football team, a.k.a. the Oregon Ducks, beat Florida State in the Rose Bowl Thursday night, a few players were seen and heard mockingly singing "No means no" to the tune of FSU's War Chant.

I don't like Jameis Winston, so I don't care about him being mocked. He's arrogant, immature, spoiled, whiny, and stupid. And I can't like anyone who says something like this:

"The only thing as vicious as rape is falsely accusing someone of rape."

In Winston's mind, being falsely accused of rape is the same as being raped. Winston thinks what he's gone through is just as "vicious" as if some guy had forcefully penetrated him against his will. I wonder if he'll have nightmares, difficulty sleeping, panic attacks, or other symptoms of PTSD after being accused of rape. Hopefully he can find a good shrink or support group and one day get over the viciousness of the ordeal he's had to go through, which in his mind is the same as the ordeal rape victims go through.

Anyway, back to Oregon players making light of all this. Oregon says they will discipline the players. I don't know how you can effectively discipline college football players apart from benching them or revoking their scholarship. You can't really fine them. What else are you going to do? Give them detention? Even more laughable, take away academic credits? Or hold them back a year (also known as redshirting)?

In college football, the athletes (and sometimes the coaches) have all the leverage in the disciplinary situation. And poorly disciplined teams frequently succeed (see: Florida Gators). So long as the cash flows, and the donors buy a new uniform every week, discipline is a secondary issue.

Just look at the stupid actions of Jameis Winston that were proven. The crab legs. The fuck her right in the pussy. Those are great examples of discipline being secondary. And in theory, you'd think someone falsely accused of rape, who nearly saw all his life's dreams taken from him, would learn a lesson about how he behaves. You'd also think that someone who got away with a crime would continue to act with abandon. Which one of these two does Jameis Winston act like?

I don't care about Winston being mocked. But I can't laugh about this particular mock. The Oregon players just seem too happy making a joke about a possible rape. That's not something to laugh about. Doing so is fucked up.

Anyone who has seen my Twitter feed (@BostonBloodSox) probably knows that I too crack jokes about Jameis Winston, Florida State, and the Tallahassee PD.

Oregon is covering up the football as well as Florida State and the Tallahassee PD cover up sexual assault #RoseBowl #FSUvsORE
— BostonBloodSox (@BostonBloodSox) January 2, 2015

My jokes, however, are cynical observations of the absurdity of the case. I don't laugh or smile when I post them.The whole situation is so ridiculous, and such a sad joke in and of itself, that the only way you can talk about it without feeling dangerous levels of toxic rage is to joke.

Another example of a cynical joke about this particular story: If the Tallahassee PD investigated whether or not these Oregon players made this mock chant, even with video evidence, it would take them 2 years and the investigation would be inconclusive.

Another one: If an FSU player made a video like this, he'd delete it for some reason, and nobody would question why it was deleted.

These aren't jokes to elicit laughter. These jokes are meant to point out how tragically silly and painfully stupid the situation is.

A girl's extreme drunkenness is used to question the reliability of her story, yet somehow as drunk as she was, she was able to willfully give consent? Furthermore, I know the principle of innocent until proven guilty, yet for some reason in rape cases, the accuser is guilty of being a dirty lying slut until proven innocent. And if it involves someone famous then said hoe is even less likely to be telling the truth.

It's a joke that Winston thinks being accused of rape is "as vicious" as being raped. It's a joke that ESPN uses euphemisms like "off-field distractions" to describe the case. It's a joke that some in the media and many fans are 1,000% certain of Winston's innocence, there's no doubt at all, as if they've been present for all of Winston's sexual encounters and know for a fact that they've all been consensual. Then these people point to an unmotivated, poorly executed police investigation as evidence of this 100% certainty of innocence.

The Tallahassee PD's investigation into the accusation is the biggest, worst joke of all. Read the NY Times piece exposing how poorly it was conducted. Then imagine your sister or girlfriend or wife or mother accusing someone of rape, then watching your local police investigate it with minimal effort and in almost complete doubt of the accuser, Tallahassee Style. You'd be enraged.

Rage. Frustration. Disappointment. Cynicism. Those are appropriate reactions. Not laughter and smiles, along with joking mock chants.