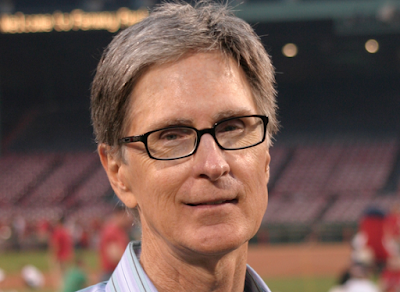 The Red Sox acquired Rick Porcello and then extended his contract because the 26-year old fit into the new philosophy recently developed by the Front Office. Instead of paying extra for pitchers over 30, and taking the risk of their performance falling off at the end of a contract, the Sox would target younger pitchers. These players wouldn't be as proven as the older pitchers, but that would actually make them a better investment, because that would make them less expensive. Furthermore, the potential upside for younger pitchers made them an opportunity, not a risk.

Compare this pitching philosophy with stock investments. Would you rather buy part of Facebook when it opened publicly, or when Mark Zuckerberg was still living in a Harvard dorm? Getting in early is less expensive, you get more for your money, and the sky is the limit for increased value.

John Henry and Larry Lucchino aren't "baseball people." They know their baseball intelligence isn't sufficient to beat the baseball people who run the 29 other teams. So they try to think outside of the diamond and gain an advantage using ideas like this investing strategy. Sometimes it works. These guys have built 3 World Series winners, after all. But with Rick Porcello, it hasn't worked.

Henry and Lucchino were drawn to Rick Porcello because of one number. Not his ERA or WHIP, not his WAR or K/9. It was his age. He was 26. He had 6 years of MLB experience. And he'd shown some signs that he could be a very good pitcher. So before he ever toed the rubber in a meaningful game with the Red Sox, his contract was extended for 4 years, paying him just a tick over $20M per year.

The deal would keep Porcello in Boston until he was 30. His prime years would be in a Red Sox uniform, but the Sox wouldn't have to worry about his performance falling off due to age.

The Sox dismissed doubts instead of considering them. Porcello had a career 4.30 ERA in a pitcher-friendly ballpark and in a division that didn't have many potent offenses. He only had one truly good season, and had shown inconsistency in his 6 Major League years. He had more seasons with an ERA over 4.50 (3) than with an ERA below 4.00 (2). His stuff wasn't amazing. And he pitched to contact, inducing groundballs, instead of amassing strikeouts.

These concerns probably didn't worry the Sox. If they had, they would have waited a few weeks before extending his contract. The issue of pitching to contact was likely dismissed as something that only outmoded and archaic "baseball people" would worry about, an antiquated notion of how the game should be played. And the statistical inconsistency was because Porcello was still a young man. He'd shown his potential in 2014 with 15 wins and a 3.43 ERA. The other seasons were part of his growth and development.

The Sox were so confident in Porcello's inevitable success, that they signed him as early as possible to avoid having to pay him more as his value increased. Henry and Lucchino probably imagined him having a 4-1 April, and then refusing to sign an extension. So they locked him up for 4 more years.

The assessment of Porcello wasn't the only mistake the Front Office made. The philosophy itself is flawed. Older pitchers cost more because their performance is proven. The risk with them is that their performance might fall off. You don't know how many good years you'll get. Younger pitchers also carry significant risk. There's a risk you might not get any good years at all.

The Sox paid a premium for Porcello's youth. Which is like paying someone extra for a product that hasn't been tested. They ignored obvious reasons to have second thoughts about extending his contract. They didn't try to find any reasons not to extend him. They built a philosophy based on their relative ignorance of baseball, then arrogantly assumed they were smarter than traditional baseball thinking.

It's okay to pay extra for something proven, especially something as rare and important as pitching. It's not okay to give someone who is killing your team a raise to $20M/year. But John Henry and Larry Lucchino thought they knew better than everyone else. Sometimes smart people do the dumbest things.