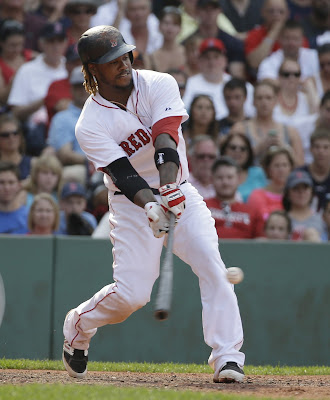 The Red Sox took 2 of 3 from the Astros over the weekend. It could have been a sweep, but the Sox blew Friday night's game. And they almost blew the rubber game on Sunday.

Hanley Ramirez (who didn't know the count at one point during Friday's loss, and stood at home plate after taking ball 4 until the umpire told him he'd walked) hit a 2-run homer on Sunday that won the game. (seriously though, how does a hitter not know the count, especially since there are big green and red lights in left field telling you how many balls and strikes there are?) 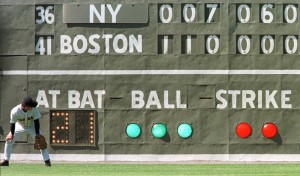 Ramirez's homerun came after Alexi Ogando surrendered the lead by allowing 3 runs off a pair of homers in the 7th. For some reason John Farrell didn't take Ogando out, even though this year he has struggled when throwing 25+ pitches (12.1 IP, 12 H, 7 ER in outings of 25+ pitches). Junichi Tazawa was evidently available, as he came in to pitch the 8th. So I really don't know why Farrell left Ogando in, or didn't have someone warming up.

David Ortiz was on base when Hanley homered. He drew a walk. Apart from that his afternoon was quite horrible. He struck out with 2 on and no outs in the 3rd. In the 5th he grounded out with runners on the corners. He's hitting .155 with runners in scoring position this year and that's inexcusable.

Ortiz was playing first base, which thankfully meant Mike Napoli was not in the lineup. Shane Victorino did go 0 for 3 as a heartfelt tribute to Napoli.

Hanley Ramirez had the big hit, but the working class hero of the game was Ryan Hanigan, who hit 3 singles, knocked in 2 runs, and walked.

Eduardo Rodriguez was okay. He held the Astros to 1 run, but his rising pitch count limited him to 5 innings. He struck out 8.

The bullpen is an issue. When every other part of a team struggled, sometimes it's hard to notice a bad bullpen. Now that the bullpen has leads to protect, we're starting to see how vulnerable and shallow it truly is. On Friday night the Sox were tied 8-8 in the 10th inning and were forced to send Noe Ramirez to the mound to make his Major League debut. He gave up 4 runs. This was after Breslow struggled, which was after Masterson made a horrible start.

I'm not dwelling on the negative. The Sox are 6 games out in the AL East. They just took 2 of 3 from a good Houston team. It would be a shame if this last ditch effort to fight for a playoff spot were undermined by a shaky bullpen, a manager who makes bad decisions, hitters who forget what the count is, fielders who forget how many outs there are, and baserunners who don't know when to steal and when not to.