Patriots don't get revenge, but get a W and a few LOLs 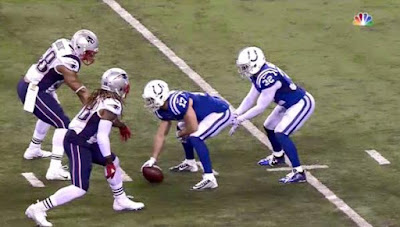 It wasn't the embarrassing blowout that many Patriots fans had been hoping for and many sports pundits had predicted. But there's still embarrassment. There's still Tom Brady being amazing. There's still a Patriots win over the Colts.

You were never going to get "revenge" in this game, Pats fans. But the chance to reassert your superiority over the Colts while simultaneously laughing at their buffoonery carries with it a certain satisfaction.

The Patriots didn't let the hype around this game affect them. They played with focus and concentration. They made adjustments. They were patient. The Colts, on the other hand, played with too much urgency. They tried too hard to write the script of the game instead of just letting it happen. The fake punt Snapfu (term coined by Grantland's Bill Barnwell) was a perfect example of the Colts trying to force the game to play out a certain way. Just punt. Or fake.

Seriously, Pagano, you're going to go after the Patriots by trying to out-coach them? That was the "weakness" you attacked?

The Colts were able to keep this game close thanks to plays like Julian "Nine Fingers" Edelman bobbling a pass, giving Mike Adams an easy pick 6. Indy had a strong first drive as well, but even that series was a fraction of an inch away from ending with 0 points. It was a 21-20 Indy lead going into halftime, but at no point did the Colts have a firm grip on the game.

The Pats benefited from what was probably a bad call on an Indy onside kick. That was luck. What makes the good teams great is capitalizing on lucky bounces and calls. The Pats did that a few plays later when LeGarrette Blount ran for a 38-yard TD.

Danny Amendola had a big game, which was pivotal with Julian Edelman's bent pinkie finger. Edelman and Jamie Collins made the most athletic plays of the game, Edelman twisting inside defenders on a 4th down run, Collins leaping over a long-snapper to block a PAT.

And Tom Brady was Tom Brady. That interception that wasn't his fault was his first of the season. He was mobile inside the pocket, giving himself time to make plays. What continues to impress me the most about Brady is his inhuman ability to not be distracted by all the noise and the things that would affect normal human beings like us.

So the Indy game is over. And we're on to New York and the Jets. And it's for first place in the division. That's not a typo.