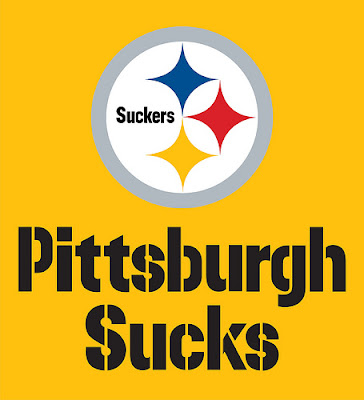 Being a Patriots fan hasn't been too fun the last month. Losing to the Colts, an embarrassment on Monday Night Football, choking to the Dolphins, then 4 out of 53 players show up late because of weather. But for a bit of fun Schadenfruede, just revel in the struggles of the Steelers, once thought to be contenders with the Patriots for the trivial and meaningless title "Team of the Decade."

The Browns managed 84 passing yards against Pittsburgh in their 13-6 win. The teams combined for 471 yards of total offense. Brady Quinn had a QB Rating of 48.1, and still won the game. He was 6 for 19, for 90 yards. Cleveland got 171 yards on the ground.

I'll be fair, the Steelers have been hit hard with injuries this year. Troy "Lead With the Head" Polumalu is out. Asking the Steelers to win without him is like asking Carmen Electra to have a show-biz career without her tits.

But it's still fun to watch the Super Bowl Champions struggle against teams like the Browns.