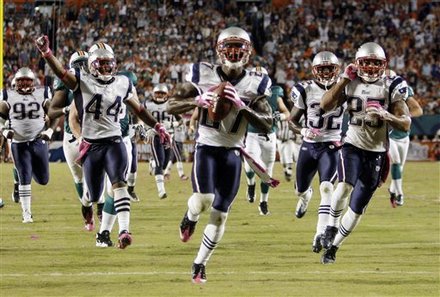 Interceptions, blocked kicks, blocked punts, and tons of returns for touchdowns. Was Troy Brown playing? This was just a very strange football game. Strange, but enjoyably so. When was the last time the Patriots defense and special teams made so many big plays?

It was nice that the defense made Chad Henne look like Chad Henne. I don't think I'm alone when I say that I was worried the D would make him look like Marino, just like they made Ryan Fitzpatrick look like Jim Kelly. At the same time, we shouldn't glorify the Patriots defense and special teams as being playmakers all on their own. The Dolphins contributed with their awful protection on special teams, and Chad Henne's very poor decision making.

But I'll take a divisional road win. And it was as close to a "must win" as you can get in Week 4. The Pats couldn't afford a second divisional loss. And if they hadn't won this road game, doubt may have festered in the Pats' locker room for two weeks.

What's kind of nice is that the Patriots didn't need Tom Brady, Randy Moss, or Wes Welker to have ridiculous games. BJG Ellis was arguably the best performer on the offense, with 76 yards in 16 carries (4.8 per carry), and a touchdown. Danny Woodhead had an eerily Kevin Faulk kind of performance with only 36 rushing yards, 11 receiving yards, but obviously much more than that. Because each of those yards were big. And that one reception he had was for a touchdown. 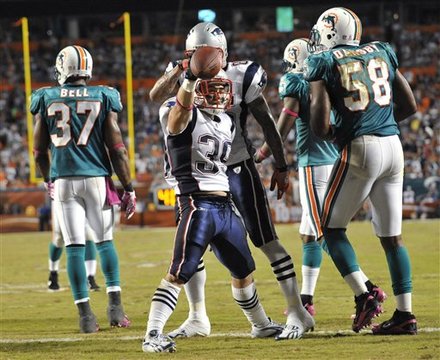 The offense didn't do much. They didn't have to. It really was all about the defense and special teams making big plays. But they made them by doing their job, and capitalizing on mistakes. That was very 2001-like. Ninkovich's interceptions came because he did his job in coverage, the ball found him, and he caught it. It's not complicated.

I didn't like Vince Wilfork being used as a defensive end. It gave the Dolphins license to run to the other side. And Wilfork was too distant from the point of attack to have any effect. I understand that the Pats are short of DEs. But that shortage shouldn't cause them to also be short of DTs. Wilfork in the middle at least forces the opposing running game further to the right or left. If Wilfork is on the end, half the field is open for a rushing attack.

Let's not get too high from this win. But it is nice, isn't it?

Pats have next weekend off, then host Baltimore on the 17th. 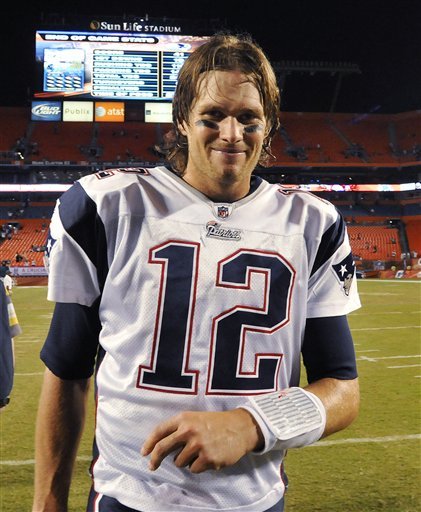