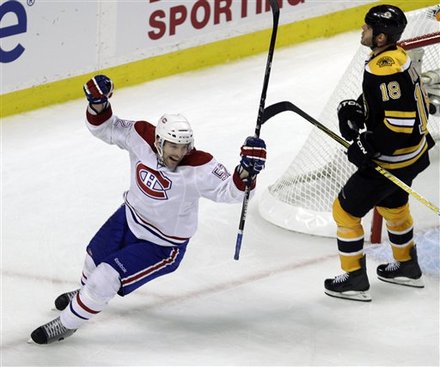 A few days after a guy named Price shut down the Sox, Carey Price shutout the Bruins. I'm just glad the Knicks don't have anyone named Price.

It's been my mantra all season long. The Bruins give the puck away too easily in dangerous places. Their power play sucks. They have too much trouble entering the zone. The forwards aren't good shooters. All these problems were on display last night.

He wasn't under enough pressure to justify his blind pass. The B's traded for Kaberle because he was a "puck moving defenseman." But last night, he moved the puck far too often. Instead of trying to win a one-on-one confrontation with a Canadien, he'd arbitrarily pass it to another spot on the ice, often a more dangerous spot.

Kaberle's second mistake was how hard he passed along the boards. It wasn't a soft dribbler to the relatively safe corner. It wasn't a hard screamer along the kickplate and out to the blue line. It was the perfect speed to set up a Canadien by the faceoff circle.

Kaberle's third and fatal mistake was to take a large circular route around the net. He vacated the slot, abandoning Tim Thomas to fend for himself against a pair of Montreal forwards. Three mistakes in one play. That's impressive.

Lucic's giveaway was a lot simpler, but no less stupid. There was no reason to try to outmaneuver Scott Gomez there. Just pass it back to the defensemen, or self-pass off the boards, but there's such little reward for so much risk in that situation. Lucic simply lost his patience, and tried too hard to make a small play.

That's why the Bruins allowed 2 goals. Why didn't they score any?

Give some credit to Price. Give some credit to nerves, as playoff rookie Brad Marchand had a few golden opportunities he seemed a bit too eager to slam home. Krejci was still in regular season mode, trying and failing to make his clever plays in the middle of the ice. Those don't work in postseason play. And Milan Lucic was a complete ghost for 2 periods. He didn't show up until the 3rd, and then his most important play favored the Canadiens.

The Bruins' power play was dreadful. But the penalty kill was good. I'll take that exchange. In this series, if the B's can emerge from a game even on special teams, that's a victory.

For the Bruins to win this series and go deep into the playoffs, they need their best players to show up. Lucic, Chara, Marchand, Bergeron, Recchi. They need to eliminate the mistakes they made last night. They need more ferocity, more energy, and more bloodthirstiness. When Montreal was on the ropes, the Bruins seemed to slow down. That's when they need to speed up. They need second chance opportunities on Price. They need to control the crease on both ends of the ice.

Game 2 Saturday night at the Garden.