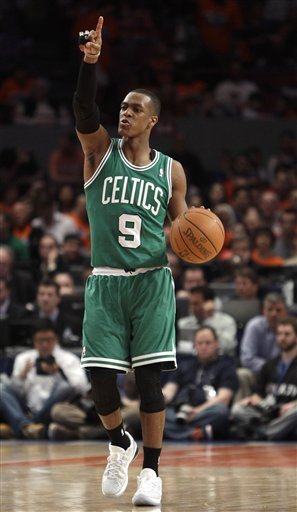 New Yorker's talk up their arena so much. Just because it's old, antiquated (why is it so poorly lit for hockey games?), and lots of college basketball gets played there, New Yorkers think MSG is "historical" even magical/mythical. But I guess if I were a Knicks fan, I'd brag more about my building more than my team.

The Celtics disposed of the Knicks on Sunday. And even though I'm not confident in a deep playoff run for the C's, I'm not surprised that the Knicks were so easily defeated. Maybe the games were close, and maybe the Knicks had a valiant 4th quarter effort yesterday to make things interesting, but when did they ever have control of this series? And look elsewhere. The Heat lost to the 76ers yesterday. Isn't that a bit more disappointing than only winning by a few points?

I don't think the Celtics have the depth, or the health to win it all this year. They can still go deep, simply because guys like Ray Allen, Paul Pierce, and KG are so ludicrously clutch. And Rondo has stepped it up, as well. So while I don't think we'll be celebrating Banner #18 in Boston, I won't turn down the opportunity to celebrate a triumph over a team from New York.

Besides, anything is possible.