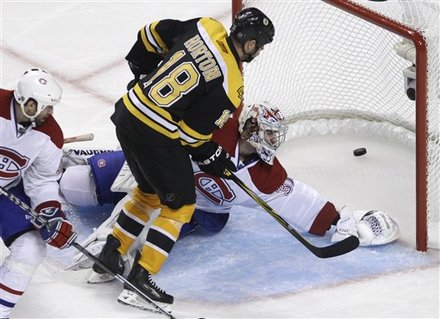 How's your heart? Mine's still recovering from Saturday night's shenanigans. It took 89 minutes to determine a winner, but you can't say the Bruins didn't earn it.

Tim Thomas and Carey Price had two of the best goaltending performances of the playoffs. Price is the only Canadien that I respect. He and Thomas combined for 94 saves on 97 shots, which translates to a .969 save percentage. Thomas made his biggest save in the 2nd overtime period.


The three aspects of Thomas' game that combine to make him great are his balance, vision, and quickness. This save exemplifies all three of these qualities coming together to result in magnificence. His balance allows him to cut down the angle against Moen without committing to the shot. His center of gravity remains in his mid-section, which allows him to react to Moen's pass. Thomas actually does a better job reading the play than Ference. He starts moving to play Gionta before Gionta moves his stick to play the puck. Thomas' quickness allows him to get to the spot in time to not only block the shot, but to safely steer it to the corner.

But that play might not have been the save of the game.


This might have been Michael Ryder's best defensive game in a Bruins uniform, and not just for that play.

In order to succeed in the playoffs, a team needs to improve, from game to game, and series to series. The Bruins have done that in this series. They've stopped giving the puck away in dangerous areas. They're winning battles. They're getting bodies in front of Price. Ryder's actually playing. Horton is muscling people around. Chara is fully hydrated and once again a physical force. And Brad Marchand no longer looks like a rookie.

Marchand's goal was a prime example of Boston's physicality triumphing. The B's aren't going to get more big hits than Montreal. The Habs use their speed to inflict big hits, and to avoid them. But on Marchand's goal, the Bruins repeatedly won inside position, and it ultimately resulted in a goal. That's where the Bruins' strength can defeat the Canadiens' speed.

Things aren't perfect yet. It's hard to discuss faults and flaws after thrilling back-to-back OT victories. But there's plenty of room for improvement. The power play continues to struggle, which is fine because the PK is clicking beautifully. The Bruins have stopped turning pucks over on their defensive blue-line, but they need to take better care of it between the offensive blue-line and that Stanley Cup Playoff logo.

Then there's Kaberle. His lack of strength directly lead to Montreal's 3rd period goal. The Habs had been pressuring the B's for 10 minutes, but Kaberle's inability to push a puck to a safe area allowed Montreal to score. Kelly and Peverley have contributed so much more than Kaberle has.

I was glad that Horton and the first line scored the game-winning goal. But Lucic needs to show up. He's still floating around, hoping for some good luck. I wouldn't be shocked if he's injured because he looks like he did in last year's postseason, hardly skating at all. He needs to simplify his game, stop worrying about drifting into scoring positions, and play physical. The goals will find him if he just stays true to himself.

And Krejci needs to stop dangling and deking. Just shoot the friggin' puck. You're not going to trick Carey Price.

Thankfully, Game 6 isn't until Tuesday. Both these teams need some recuperation time. The Canadiens are facing elimination and that makes them very dangerous. Under Julien, the Bruins are 2-7 when they can eliminate a team from the playoffs. They're also 0-3 in Game 7's under Julien. So despite the 3-2 series lead, I'm hardly over confident.