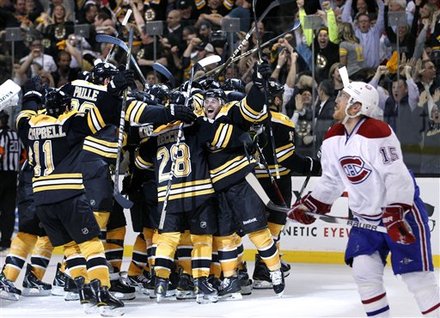 It was a little over a minute a minute after Horton scored the game-winner when I realized that I hadn't been breathing since the goal was scored. I was that excited, that relieved, that exhausted.

Now to the game. It was far from pretty for either team. Or for the refs. There was finally a goal scored while the Bruins had a man advantage. Unfortunately, it went the wrong way. The Canadiens dove a few times, got a few calls, but were eventually hurt by a dive. Then one of the Bruins' leaders made a silly mistake, the Habs capitalized, and to Overtime it went.

But it was Nathan Horton, a newcomer to the playoffs, who scored the winning goal. He scored 3 times in the series, and was the only first-liner to really imprint himself on this series. In the regular season, when Horton was scoring, the Bruins were nearly unstoppable. When he slumped, they had to grind games out. In other words, he's a key to the Bruins' success.

Beating the Canadiens is just extra sweet. Not only is it a rivalry with tons of history, but the Canadiens play a completely different style of hockey from the rest of the NHL. Habs fans bitch and moan about other teams playing dirty, not "playing hockey the right way," then the Canadiens dive and flop like a bunch of Brazilian soccer players. That's not hockey being played the right way. It was perfect justice that Hamrlik dove to steal a call, and Kelly took advantage of the 5-on-4 to score.

PK Subban is a hell of a hockey player. But his diving is just an embarrassment. He's a strong dude. Yet David Krejci apparently can manhandle him. So can Gregory Campbell. It's just sad to watch a talented player like that resort to such childish tactics.

While I'm thrilled to eliminate the Canadiens, there's still plenty of room for improvement that needs to be addressed by the time the Flyers series starts. The Power Play actually got worse last night. Not only did they fail to score, they allowed a goal.

The nature of the shorthanded goal was what pissed me off. The Bruins struggled with entry, so they tried a gadget play. Seidenberg's supposed to back-pass to Recchi in the center, which will cause the Montreal defenders to stand up at the blue-line. But Montreal was going to yield entry. There was no need for the trickery. And it was incorrectly timed anyway. The pass came too early, Recchi couldn't handle it, and Montreal tied the game with a shorthanded goal.

The Bruins are the first team to ever win a 7 game series without scoring on the Power Play.

Bergeron's penalty was also inexcusable. 180+ feet from his own net, late in a game, with a 1 goal lead, he doesn't need to be flailing his stick around like that.

The first line needs to show up. The big players need to make big plays. Krejci is useless. He had another golden opportunity tonight, with half a net to shoot at, but his backhander went way over the crossbar. Lucic made a smart pass to find Horton for the game-winner, but he's still floating, still waiting around for something to happen. He needs to make things happen. He used to seek contact. Now he's almost avoiding it.

The Power Play and first line need to contribute. The defense can't afford anymore giveaways. The Flyers are better than the Canadiens. Much better. Sure, the Flyers' goaltending is questionable, but their forwards are relentless. The Canadiens were dangerous on the PP and on the counter-attack. The Flyers are ALWAYS dangerous.

I'll revel in this victory for a few days. But the Flyers are next. Improvements need to be made. Meanwhile, the Canadiens can...