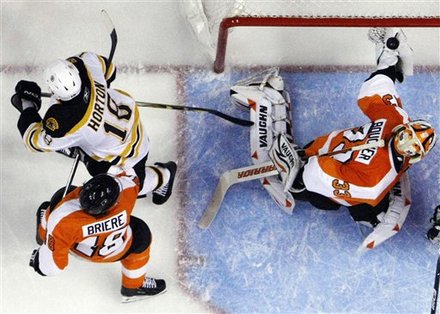 You have to be happy, as a Bruins fan. This team does have some differences from last year's. Tim Thomas, for instance. He made a huge stop early in the 3rd to keep it 1-1. If Philly takes a lead there, who knows how momentum swings. Krejci missed the last 4 games of the series last year, he had 2 goals and 2 assists. Seidenberg was also hurt, and he had a monstrous game, pinching in on offense.

Then there's newcomers like Horton, Campbell, and Marchand. Marchand looks better and better with each playoff game he plays.

But we went up 1-0 last year. The Flyers are not pushovers. They stay even-keeled, and they're already over this loss. These are not the Canadiens. The Canadiens could be affected by a 3 goal deficit, or an unfortunate sequence of events. The Flyers don't care.

The Bruins' Power Play is still painful to watch. Is there a rule that allows teams to decline a Power Play, I think the Bruins should do that. They struggle with entry, and when they do take the zone, they stand still.

I'm happy with this result. But it has to already be put in the past for the Bruins.