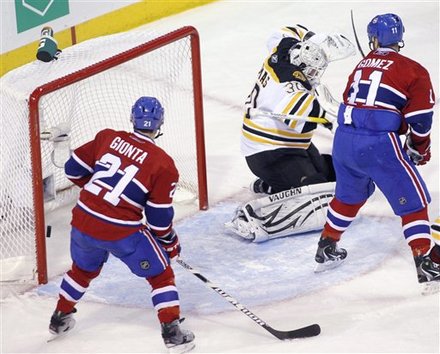 NESN's Andy Brickley (whom I'm a big fan of) remarked that he didn't think the better team won last night. I don't know what game he saw, but I didn't see the Bruins as being the better team. Montreal didn't really dominate, but they never screwed up, never gave the Bruins big chances, and when the B's had opportunities, they were squandered. The Habs were the better team.

This game was questionably officiated. While I understand Lucic getting a minor, even a major, for what he did, I don't see how an ejection was justified. Lucic and the Bruins get punished because Spacek put himself in a vulnerable spot and Lucic didn't hold back a check. How many times have we seen the Canadiens pull back a check in this series?

Then again, what has Lucic done in this series? Was his absence the difference in this game? I don't think so.

The Bruins cost themselves a number of penalties on their own. Too many men. Later, a delay of game. These are perhaps the most avoidable penalties of all, and yet the Bruins committed them, and both led to 5-on-3 goals.

And let's not forget that the refs screwed up a call that would have resulted in a Canadiens goal. If anything, the Bruins got a bit of luck in this game.

Then the B's own Power Play, which continues to struggle. The Bruins are the only team in the playoffs not to score a PP goal. Think about that. Multiple teams are already eliminated, and they all scored a PP goal. Poor entry, poor possession, that's been the story with the Bruins on the man advantage.

Under Julien, the Bruins are now 2-8 when they can eliminate their opponent. That's 2-8 against teams they've already beaten three times. Julien, in his career, is 1-3 in Game 7s. I'm more than a little worried. Game 7 tonight.