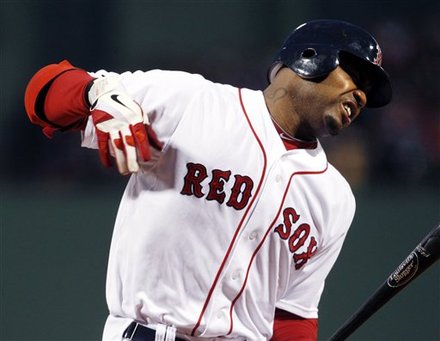 This just gets worse and worse. You knew this would be a pitcher's duel, you knew it would be tight, but watching this offense still hurts. Crawford's struggles are beyond a slump. Same with Youkilis. It's psychological, or physical, or physiological. It's not a run of the mill, ordinary slump.

Lester was good, apart from the 5th inning. And even though he allowed 3 runs off 4 hits in that frame, the Rays were hardly knocking him around. It's Lester's second Quality Start in a row, and the second time the Sox have failed to win despite such a start.

One of the few bright spots has been the performance of Jed Lowrie. He hit a pair of doubles and knocked in a run. He's now hitting .438. There's no reason he shouldn't be starting every day, at least until he's cooled off.

The Sox are now in danger of being swept for the 3rd time this season. John Lackey takes the mound to face James Shields. I'm rooting for the rain.