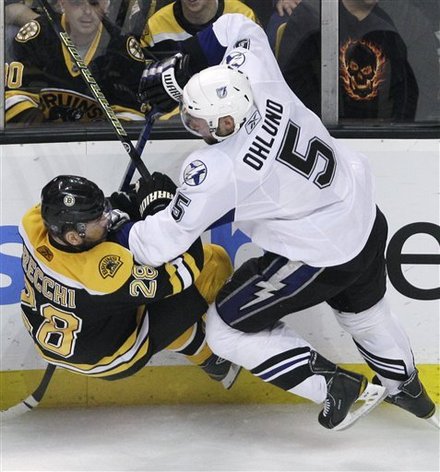 The 5-2 score is a bit misleading. The game was closer than that. Although, if not for Tim Thomas, the Lightning would have scored 7 or 8 times. What I'm saying is that the Lightning outplayed the Bruins, Thomas kept them in the game, but foolish blunders took the B's right out of it.

This was a lot like the mistake-ridden start of the Montreal series. Tampa scored their first goal when Seidenberg lost his stick. Neither of the two Bruin forwards in the area (Ryder and Peverley) lent him theirs. And though Seidenberg is a lefty, and both forwards are righties, a defensemen without a stick is pretty useless. Then again, Seidenberg didn't seem to yell or gesture to Ryder or Peverley. None of the Bruins on the ice pointed out that the guy covering the crease had nothing to cover the crease with. The puck found Seidenberg, he tried to kick it out of danger, it went straight to Sean Bergenheim, who had a stick, and it was 1-0 Lightning.

The second Tampa Bay goal saw Michael Ryder utterly fail in neutral zone coverage. There was no effort on his part to play the man or the puck, and Brett Clark leisurely skated past him. The goal itself was a soft one for Thomas to allow, but Clark should have never penetrated the zone with such ease. 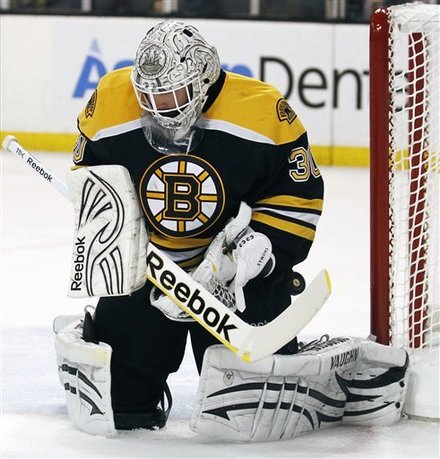 The third was the ugliest. An unforgivable giveaway by Kaberle just behind the net. The guy was acquired for his puck-handling skills, and he messes up a dribble right next to the goal. The play surprised Thomas, but not Teddy Purcell, who tapped in the gift goal. 3-0 in an 85 second span.

Seguin gave the Bruins hope with a magnificent breakaway goal toward the end of the period. Despite this, we didn't see much more of Seguin. He only got 9:38 on the ice. Shawn Thornton, for comparison, got 8:29. Seguin scores, yet Michael Ryder, whose lack of effort helped Tampa score, gets 11:55 on the ice. Not only that, Ryder got 4:55 of Power Play ice time. Tyler Seguin got 0:00. 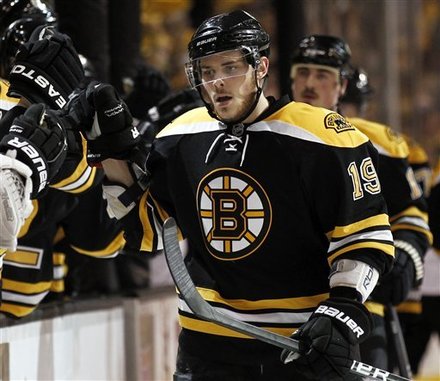 I understand the philosophy that's kept Seguin on the bench and scratched this season. You have to earn your time on the ice. And that's sensible. But what has Michael Ryder done to earn his ice time? His effort has been intermittent for the last 2 years. But Julien loves him. Why is it okay for Ryder to fail for weeks even months on end, and yet Seguin doesn't get a chance to play one shift on the Power Play?

And look at what Ryder's done this postseason. He had one great night in Montreal with 2 goals and an assist. But in 12 playoff games, he's totalled 2 goals and 4 assists. He gets nearly 5 minutes of Power Play time, Seguin gets 0 seconds.

The Bruins had three Power Plays in the 2nd period, when it was a 3-1 game. Scoring in one of them would have completely redirected the course of the game. By the third PP chance, they were doing well, and finally someone had an excellent scoring opportunity. Unfortunately, it was Kaberle, who has never been known as a shooter. He's a passer, a "puck mover," which is a euphemism (nice way of saying) for someone who plays bad defense and can't shoot.

The Lightning's fourth and fatal goal came in the 3rd, after Boychuk took a stupid penalty. He'd just leveled Simon Gagne with a clean hit. Lecavalier came over to give Boychuk the business, and Boychuk punched him. In the playoffs, you don't bring a fist to a shoving match unless you want to end up in the box. Lecavalier's been around for awhile and was smart enough not to punch back.

I have no problem with Boychuk shoving Lecavalier around. But don't punch him. It's going to get penalized. Then you have to hope the other guy is dumb enough to punch back. Lecavalier is an 11 year veteran with over 50 career playoff games under his belt and his name on the Stanley Cup. He's not going to do Boychuk any favors.

On the resultant Power Play, the Lightning scored, and the game was over. It's a shame because the Bruins had been surging nicely up until the penalty. Boychuk killed all their momentum, and handed Tampa Bay the dagger with which they finally killed the Bruins.

The Bruins didn't do much well in this game. Thomas was their best player, despite the 4 goals he allowed. He kept them in it, though.


The Bruins attempted over 60 shots, but only 33 got to the goal. 17 were blocked, the rest missed the target. Roloson was never tested, and probably never broke a sweat. No traffic in front of him, nobody made him move side-to-side, no rebound opportunities.

Give credit to the Lightning. They're good. They're fast. They can score. It's a simple, yet effective formula. In my preview of this series, I said that the Bruins had to limit turnovers, and not take stupid penalties. Saturday night, they turned the puck over (in extremely dangerous places), and took stupid penalties. They dug themselves a big hole then had to fight uphill all night.

Against Montreal, the Bruins were able to screw around for 2 games, recover, and win the series. Tampa Bay isn't going to give them the same opportunity. The Bruins need to get their act together NOW.

Game 2 Tuesday night in the Garden.