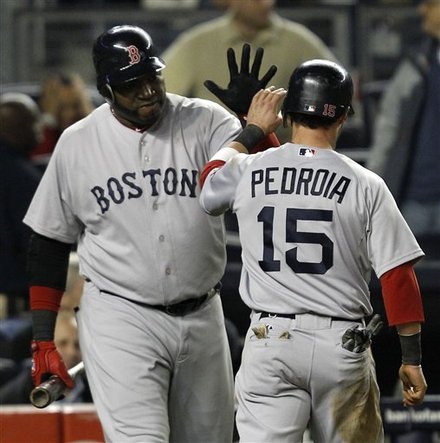 It's May 16th. And even though the weather's a bit raw, the baseball season is well under way. Summer is approaching. And for the first time all year, the Red Sox are .500.

Remember a few weeks ago, when we were all talking about 100 regular season wins? And now we're skipping in the streets about having as many wins as losses.

It seems kind of silly. Then again, sweeping the Yankees in the Bronx in order to reach this plateau makes it extra special. And the Yankees are only 2 games above .500. As much as the Sox have struggled, they're only 3 games behind the Rays. With 122 games left to play.

Pitching has propelled the Sox to .500. But hitting provided the final ounce of propulsion. They've finally started to hit with runners in scoring position, kind of, and finally started hitting homeruns. Youkilis' 3 run homer in the 3rd was vital to the Sox' effort last night. Ortiz's and Salty's provided the necessary insurance to win.

To be blunt, the Yankees simply aren't that impressive. They've got plenty of names that were intimidating in the late 1990s, but now are just prima donna headcases that seem to distract more than contribute. And how much money is Jeter going to get to hit .260? It's not as if he was underpaid before this season, either. What an overrated, greedy bucket of garbage.

The Sox have finally cracked .500. They'll start a homestand that might be impeded by this unseasonable rain, though. Matsuzaka faces Chris Tillman of the O's tonight, weather permitting.