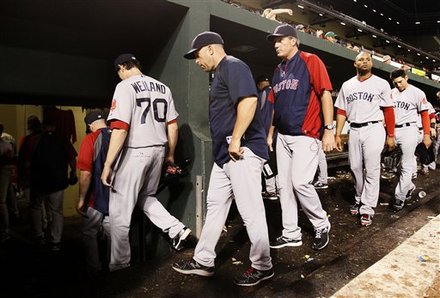 The Sox had Josh Beckett on the mound. They needed a great start from him. They did not get one. And once again, a poor pitching performance resulted in a loss. Although it's not like the offense did their job either. They got on base (11 hits, 4 walks), but couldn't get the hits when it mattered most.

I want this team to make the playoffs, simply to avoid the shame of such an historic collapse. But this team simply does not deserve it. People have criticized the GM, the manager, this team's "heart" or lack thereof. They've blamed injuries, and there's some validity to that. I, however, do not think this team has good pitching.

And while the offense scores runs in big bunches, it's not structured to be consistent. The lineup is too vulnerable if one or two key players slump at the same time.

The whole season is on the line. The Sox arrived in Baltimore with some momentum, with an alleged Ace on the mound, and with their destiny completely in hand. If they'd swept the O's, they'd win the Wild Card. Now the Sox have to win 2 games and they still might need a one game playoff against the Rays in order to make the postseason.