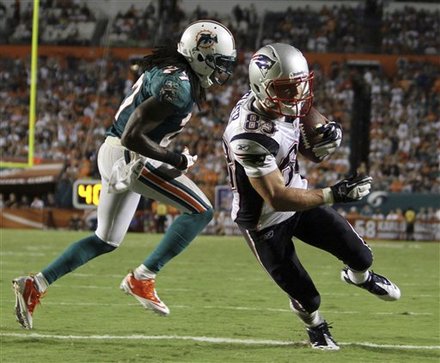 There was a point in this game that I was worried. It was when it was 14-14 just after halftime. The Dolphins defense had been pressuring Brady, and I had a not-so-good feeling that the Pats would lose 24-21 or something. But a 10 play, 73 yard drive that ended with a 2 yard pass from Brady to Welker alleviated all my concern.

The Patriots' offense is just too good for most teams in the NFL to handle. As much as Jon Gruden was on Cameron Wake's junk, the Dolphins' defense simply could not fathom what Brady and his receivers and tight ends were doing to them.

Brady's numbers tell the whole story. 32 for 48, 517 yards, 4 TDs, and an interception that wasn't really his fault. 8 different Patriots caught passes. Four of those guys had over 80 yards receiving.

Defensively, the Patriots had a few agonizing drives. There were some big 3rd down and 4th down plays that reminded me of last year's 3rd down horror shows. But there was something different this time. There were some quality plays in big situations, especially from the defensive front. The raw power of Haynesworth pushed the defensive line back so many times.

It wasn't perfect. Ochocinco was invisible except for one catch and a procedural penalty. Edelman was a bit too eager to return the ball even when it would have been better to take touchbacks. McCourty could have hauled in an interception. These were exceptions, though. This was a good win on the road in the division. I'll take it.