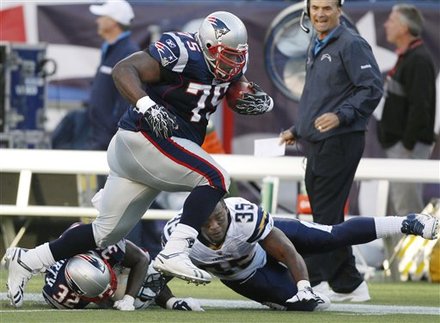 Brady had asked the fans at Gillette Stadium to get "lubed up" but it was the Patriots' offense that was a well oiled machine. Brady himself has already thrown for half a mile this season. BJG Ellis and Woodhead moved the ball well on the ground (4.1 per carry as a team), Branch had a 129 yard day, and Gronkowski caught 2 TDs.

The defense, however, played an equally important role in this victory. They forced four huge turnovers that were key turning points. Wilfork's interception took 3 points from San Diego, and gave 3 to New England. Sergio Brown's pick ended a San Diego drive that was threatening the end zone. Tolbert's fumble came on the heels of a failed 4th and 4 attempt by the Patriots and destroyed any chance San Diego may have had to drive to the end zone and take a lead. And Rivers' fumble ended the game.

What I really liked about the interceptions was the pressure that helped force them. A blitzing Ninkovich threatened Rivers, who threw without realizing Wilfork was lurking. It was a tremendous tip and catch by the 325 pounder, but Ninkovich's pressure set things into motion. Rivers' second interception also came when the pocket quickly collapsed around him. He threw without stepping through and Sergio Brown caught it.

It was Wilfork's and Brown's first career picks. I'm sure the Elias Sports Bureau could find the last time two teammates had their first career inteceptions in the same game. But I'm not doing all that research. I'll just guess it was 1971 and the Rams were somehow involved.

I'm sorry if I sound like I'm attacking the defense, because I'm not. This defense is good enough to do two vital things:

1. Don't allow big plays
2. Make it difficult to score in the Red Zone

If that happens, the Patriots will be fine. Opposing teams will score, but so long as it isn't either quick or easy, then the Pats will be good to go.

Back to the offense, before anyone criticizes Chad Ochocinco, can I just point out that the guys Brady is throwing to are pretty damned good? Branch, Welker, Hernandez, Gronwkoski, Woodhead. That's a nice grouping. And they've been open. Why wouldn't Brady throw to them?

The people that have been critical of Ochocinco are usually the same ones that thought he'd be Randy Moss 2.0. He's not. He's a veteran receiver learning a system, and he's competing for playing time and receptions with some of the best in the business, who all know the system well.

Ochocinco is the 3rd receiver in an offense that almost always has an RB in the backfield, and often uses 2 or 3 tight-ends. Just because he's not on the field doesn't mean he doesn't comprehend the offense.

Things look good. There's room for improvement, but winning while improving is the best.

Pats at Bills at 1 on Sunday.