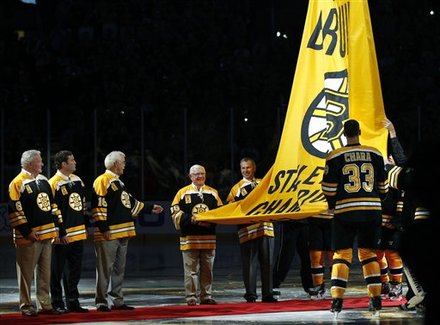 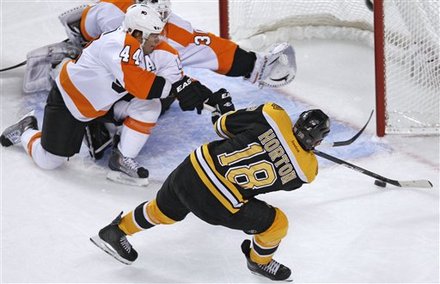 Before discussing the game, I just want to say that the pre-game ceremony was quite cool. Having armed forces, police, and firefighters lining the Cup's path into the building, then the video of all the ups and downs of the playoffs, then unveiling the banner itself, that was pretty neat.

I'm glad the speeches were short and sweat. And it was very classy to have players from the 1972 team, along with Milt Schmidt help carry the banner to its raising point. And the poignant tribute to Mark Recchi was the icing on the cake. Very well done.

The game was not so well done. It was the type of game that one year ago would have sent me into a frenzy. Not making plays out of the zone, allowing easy entry, not dumping and chasing. These were some of the problems the Bruins had last night.

Marchand and Seguin were the only two Bruins who had truly good offensive games. The Bruins had 23 shots on goal in this game, only 6 in both the 1st and 2nd periods. Give credit to Bryzgalov for stopping 22 shots. He was very impressive, and it's safe to say that goaltending is no longer a liability for the Flyers.

The Bruins allowed their first goal thanks to surrendering the blue-line too easily. Four Bruins around one Flyer, and he manages to get through. Then the second goal came after Seidenberg had the puck on his own blue line and just tapped it toward the red line. He didn't carry it, or attempt to pass it to a teammate. He just tapped it forward, Philly recaptured it, and a few seconds later they made it a 2-1 game.

I really wish the announcers had mentioned Jaromir Jagr at least once. I certainly did not get my fill on hearing about how amazing Jaromir Jagr has been for the Flyers.

There are 81 games left and I'm not going to flip out as badly as I did last year after just one frustrating loss. These are fixable problems. And on the bright side, Marchand looks great and Seguin looks good.