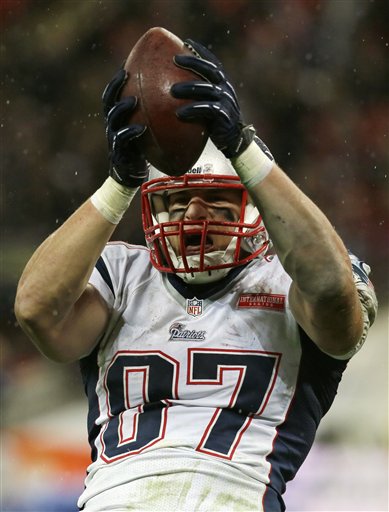 The Patriots finally beat an NFC West opponent, as they pounded the Rams in London.

Some were worried about this game because the Patriots have a horrible pass defense and Sam Bradford is a decent QB. But the Rams have their own problems. The Patriots took advantage of the Rams weak offensive line. The Pats drew penalties from an aggressive secondary. And the running game sliced and diced all day.

When this offense doesn't hiccup and continues to apply pressure on an opponent, it makes life easy for the defense. Whenever the Pats execute properly and take a 3 possession lead, their chances of winning escalate exponentially. When the offense stutters and stalls, opponents can claw their way back.

The offense doesn't need to put up 31+ every week, but when they have a chance to build a sizable lead, they MUST take advantage of it. Otherwise it's up to the defense, and that's not something you can depend on much. This team wins with offense.

Stevan Ridley rushed for 127 yards, 88 in the 3rd quarter alone. Both he and Shane Vereen ran for TDs.

Tom Brady had his 50th 300+ yard game, as well as his 40th consecutive game with a TD pass. Rob Gronkowski and Brandon Lloyd each caught a pair of touchdowns. Zoltan Mesko's feet didn't touch the ball until 12:24 into the 3rd quarter. The Patriots made it to the end zone on their first five drives.

That fake spike on 1st and goal was a trick play I didn't mind seeing. The timing appropriate, the risk was minimal. That's the type of trickery I want to see from Josh McDaniels. Nothing more.

Defensively, the Pats were able to tee off on Bradford, thanks to the big lead. Chandler Jones had his 6th sack of the season.

It was nice to be bored during the 4th quarter.

Bye week then the Bills are in town. So two bye weeks.