BC Wastes Opportunity to Upset Duke 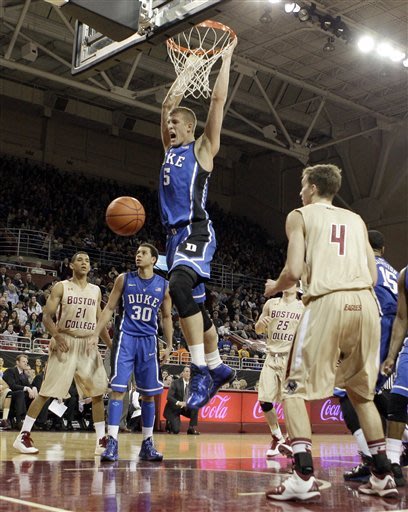 Duke had been forced to fly into Boston that morning. They were without Ryan Kelly, who averages 13.4 points per game and is a 52% three-point shooter this season. BC would be pumped to play their biggest game of the year. Duke would be playing yet another inferior opponent, the last place team in the ACC. There were all the ingredients for a possible upset.

Duke did their part for the Cinderella story. They turned the ball over (13 turnovers, and BC had 11 steals), committed stupid fouls, made mistakes on defense.

BC, however, were the ones that didn't fulfill their end of the bargain. Duke was begging to be beat, and the Eagles didn't take advantage. They had a 2 point lead and the ball with 1:27 left. They were tied 61-61 with 30 seconds left, when a visibly nervous Joe Rahon lofted a three-point attempt that bounced off the top of the backboard. They were down 62-61 with 7 seconds left when their best player, Olivier Hanlan, missed a jumpshot.

A win against Duke would have salvaged BC's season. It would have given a team of underclassmen massive amounts of confidence in the future. They would remember beating the #4 team in the country, and would feel capable of beating anyone.

As I've come to expect from BC Athletics (excluding hockey), BC choked. Opportunity presented itself, and BC bungled the gift. Fate spread her legs for BC, and the Eagles prematurely ejaculated. They have the talent, they have the opportunities, they just don't have The Clutch: that intangible quality that allows a player to perform at his best at the most important moment of his life.