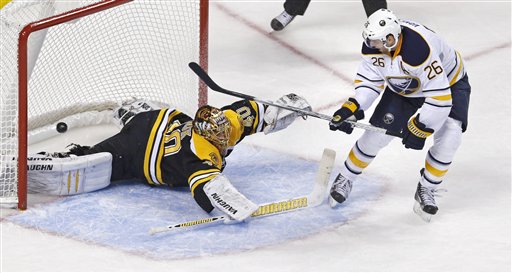 The Bruins need to sign Thomas Vanek, or bribe some Western Conference team into signing him, because he absolutely kills the B's. He had 3 goals, 2 assists, and was +4.

As good as Vanek was, the difference in this game was the goaltending. Ryan Miller made some absurd saves in the 3rd period that kept the Bruins stuck at 4 goals. On the other side of the ice, Tuukka Rask wasn't responsible for most of Buffalo's scoring. But on Buffalo's 4th goal, scored by Alexander Sulzer, Rask's glove was just a little bit heavy. You're seeing teams attacking him high glove-side, and it's because he's somewhat slow.

To be clear, I'm not blaming the loss on Rask, I'm just saying the goaltending was a major factor in the outcome of this game. Ryan Miller was great, Rask let up a goal that was possibly due to a weakness of his.

Speaking of weaknesses, the Bruins were 0 for 4 on their power play. They didn't get much going.

The Bruins need to recover and regroup. The next two games are also within the division. They're in Toronto Saturday night then Montreal Wednesday night. And they have 2 more against Buffalo in the near future.