Bruins Leave It Late Against Leafs 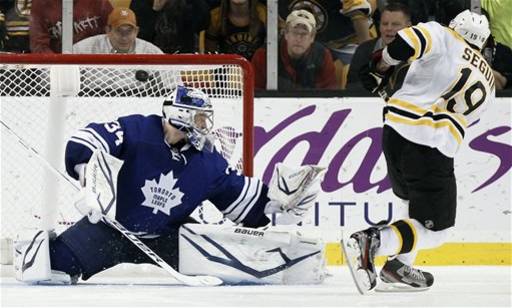 The Bruins needed this win. More accurately, they needed to not lose. What's the difference? Well, the positive impact of winning this game isn't nearly as significant as avoiding what the negative impact of losing would have been.

It was good to see Milan Lucic score a goal. Hopefully it doesn't take him 15 more games to score his next goal (that would be the second-to-last game of the season, which emphasizes how close to the end of the season we are coming). This team cannot succeed with just the Bergeron line scoring.

By the way, can we stop calling the line of Bergeron, Marchand, and Seguin the "second line?" This line is obviously the primary line. They're the scoring line. Look at the three shooters the Bruins sent out for the shootout: Seguin, Bergeron, Marchand. This is the #1 line.

It was this line that scored the tying goal. Marchand sent a puck deep into the zone, Dougie Hamilton won a battle on the boards and protected the puck, then Bergeron finished with a backhand goal.

Let's not get overjoyed about scoring 2 goals and winning in a shootout, especially against Toronto. This team is still relying on one line, and a few defensemen, to generate their offense. And once again there was a facepalm inducing goal scored when Andrew Ference was on the ice.

This team doesn't need a trade to right itself. Although a trade might help, just adding a few pieces or adjusting lines won't solve the fundamental inconsistencies from players like Lucic and Krejci. As well as the complete lack of offense from the 3rd line.