Bruins Leave it Late in Ottawa 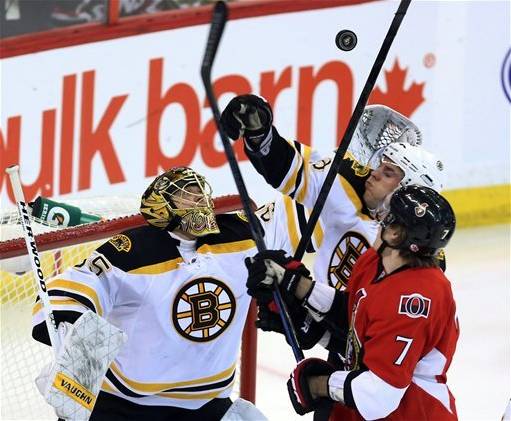 The Bruins took an important 2 points out of their game with the Senators last night. However, some things about this team still concern me.

The Power Play remains absolutely useless. They don't even get shots on goal. And that's inexcusable. How do you not get shots to the net when you have more players than your opponent?

This team isn't scoring. The Seguin-Bergeron-Marchand line is producing, but every other set of forwards is struggling. Dennis Seidenberg scored the game-winner in the 3rd. And although Daniel Paille, normally of the 4th line, scored in the 2nd, it was because of Tyler Seguin's net-drive, which drew the attention of the Ottawa defense.

The Bergeron line has become the first line. The Krejci and Peverly lines have become ineffective.

This team WILL NOT advance far in the Stanley Cup playoffs with only one line and a useless Power Play.

The Bruins are in Toronto Saturday night. Then the Leafs are in Boston on Monday. Then the Habs come to town on Wednesday. This is a key stretch of divisional play. The B's are 2 points behind Montreal, with a game in hand.