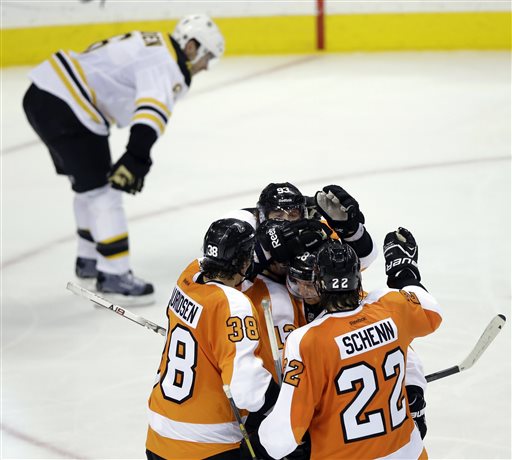 I don't care if the Bruins win or lose these games down the stretch. I don't care about winning the Northeast Division. The playoffs are all about matchups, not seeding. I care about how poorly this team is playing. They show up, give us one good period, then they cruise.

And the mistakes are getting worse. Both David Krejci and Brad Marchand, two of the best forwards on the team, made inexcusable turnovers in the middle of the ice.

Just a sidenote, I don't mind Julien sitting Marchand for the remainder of the period after that giveaway, but it aggravates me that he did nothing after Lucic made bad play after bad play, yet one mistake from Marchand and it's ride the pine time.

Anton Khudobin compounded things with a truly bad goal. The Bruins were down by 3, which is just about insurmountable for this team's offense to overcome. Even with Power Plays. Krejci made it a 4-2 game, but another turnover 13 seconds later made it a 3-goal game again.

One bright spot was that a trio of newcomers generated the other Bruins goal. Wade Redden scored it, assisted by Jagr and Carl Soderberg.

I'm tired of turnovers. I'm tired of an impotent Power Play. The playoffs are a week away. This team will be brushed aside if they don't change their ways by then.