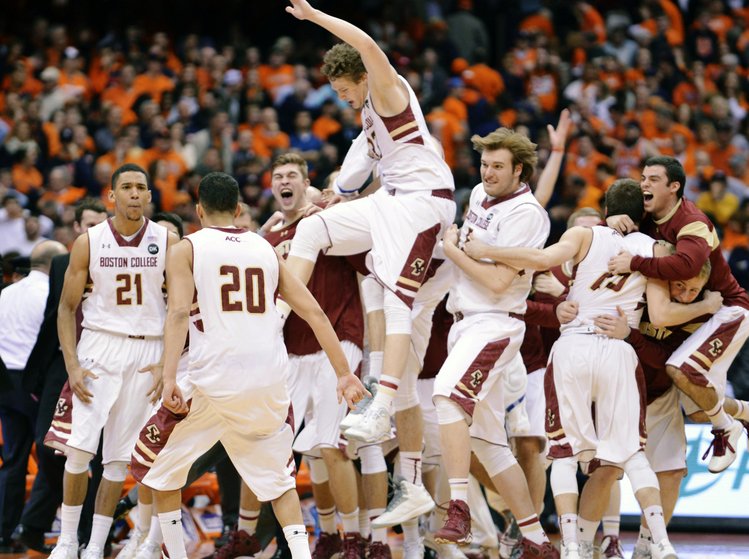 Boston College was tied for last in the ACC coming into this game. The only ACC team they'd beaten was the other team in the basement, Virginia Tech. BC had losses against Providence, Toledo, VCU, Harvard. They barely beat Florida Atlantic and needed overtime to beat Sacred Heart. They'd lost 5 straight, were 1-8 in their last 9, and 2-12 in their last 14.

A few days ago I actually thought that BC might have a chance in this game. But I dismissed the idea very quickly because BC has struggled to finish games all season long. So even if they kept up with Syracuse, they wouldn't make the necessary plays at the end of the game. My initial reasoning behind the dismissed notion was based on BC playing Syracuse relatively close in January, losing 69-59. And Syracuse looking ahead to a big game against Duke this weekend. Also, Syracuse has barely won their last few games.

Patrick Heckmann, a junior guard from Mainz, Germany, carried BC in overtime. If you look at the box score his overall contribution seems minimal. In 25 minutes off the bench he scored 9 points with 4 rebounds. He had a block, a steal, and committed 3 fouls.

In the overtime, Heckmann scored 5 of his 9 points, including a layup with 0:46 left that gave BC a 58-57 lead. Heckmann also had a block and a rebound.

This was a vital contribution because players like Ryan Anderson were falling all over themselves trying (and failing) to make big plays in the big moment.

The other OT hero was Lonnie Jackson. Syracuse fouled him twice with under a minute left because he's a 56% free throw shooter. It was still a 1-and-1 situation, so any missed free throws could have been game-deciding. Jackson hit all 4 free throws. Many players see their FT% go down in pressure situations, Jackson's went up. Way up.

BC scored 12 points in overtime. 5 were from Heckmann, 4 from Jackson. Jackson also had an assist on an Olivier Hanlan three pointer in OT.

I enjoyed this win for two reasons. I hate Syracuse. I'm friends with a number of their fans from my time living in Central New York, and when they put their orange goggles on, it's always annoying. SU fans struggle to see reality when it comes to their beloved Orange. They're impossible to converse rationally with.

The main reason I enjoyed this win, however, was because of the passing of Dick Kelley. You've probably heard broadcasters speaking of him during college games this past week. If not, I'll just tell you that Dick Kelley was the assistant athletic director for media relations at BC, which made him a focal point within BC's athletic program, a hub of communications for a wide variety of people and groups. He'd interact with athletes, coaches, other departments in athletics and in the school, just about everybody. Before games you'd see him patrolling media row, having countless conversations with anybody and everybody, and then he'd ask a BC player to pass him a ball during warm-ups and they'd talk for a bit. He died at the age of 48 last Thursday after a 3 year battle with ALS. And it was one hell of a battle.

Dick Kelley was a man who cared deeply about his work, and about what his work could do for other people, from the media to student athletes. He treated everyone with remarkable kindness and a warm smile, which makes sense since he had a remarkably kind family. He was, and forever will be, a big part of the BC family.

This win was for Dick Kelley.