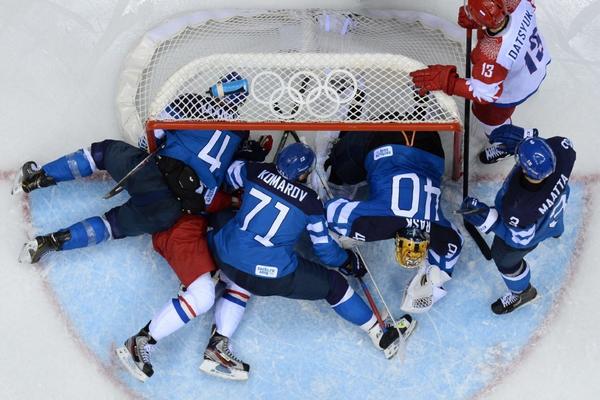 Apart from Pavel Datsyuk, and Evgeni Malkin kind of, Russian hockey players typically fail to do the little things. Alex Ovechkin, for instance. He's a great scorer, he's strong on the puck, yet he doesn't do the small things that you see star players on other teams do. And that's a theme in Russian hockey. It's also the reason why they lost 3-1 to Finland.

Russia also struggles to build on plays as a team. This is an extension of the lack-of-little-things issue. The Russians don't string together small plays and turn them into big opportunities.

This game was a series of Russian mistakes. Their first mistake was to continue with their strange goalie rotation and keep Vezina winner Sergei Bobrovsky on the bench. Semyon Varlamov got the start and allowed 2 soft goals. He was eventually pulled. Bobrovsky looked good in his two games before this. Why bench him in the most important game against a tough opponent?

Ilya Kovalchuk gave Russia a 1-0 lead with a power play goal. His celebration was so exuberant, it was almost too much. He jumped up as if he had scored an overtime game winner. I know emotions were riding high, but it was the first period. Russia played this entire tournament unable to control their emotions.

Finland scored their first goal after Russia needlessly iced the puck in an attempt to make a big play. Juhamatti Aaltonen weaved through Russians who stood around like cones. Then Varlamov failed to make a routine save.

A bad bounce on chipped ice resulted in a Teemu Selanne breakaway goal. So that means the Russians were betrayed by their own flimsy post against Team USA and now by their imperfect ice surface. Russia, you're supposed to have an advantage at home. Your own building shouldn't be sabotaging you.

Penalty killing requires players who do little things and who work as a team. Since those are two things Russia struggles with, it's not surprising that they allowed a power play goal. The penalty itself was unforced and unnecessary.

Tuukka Rask played a great game. He stopped 37 of 38 shots. The one goal he did allow was slightly soft, but he more than made up for it by making two or three incredible stops. That's usually the story with Rask. He will let in the occasional bad goal. His big saves usually outnumber those soft goals.

Russia is out of their own Olympics. That pleases me greatly.

Finland plays Sweden in the semifinals Friday morning at 6:30am (Eastern) on NBC Sports. So we have a European semifinal and a North American semifinal.