Patriots needed to win, because winter is coming 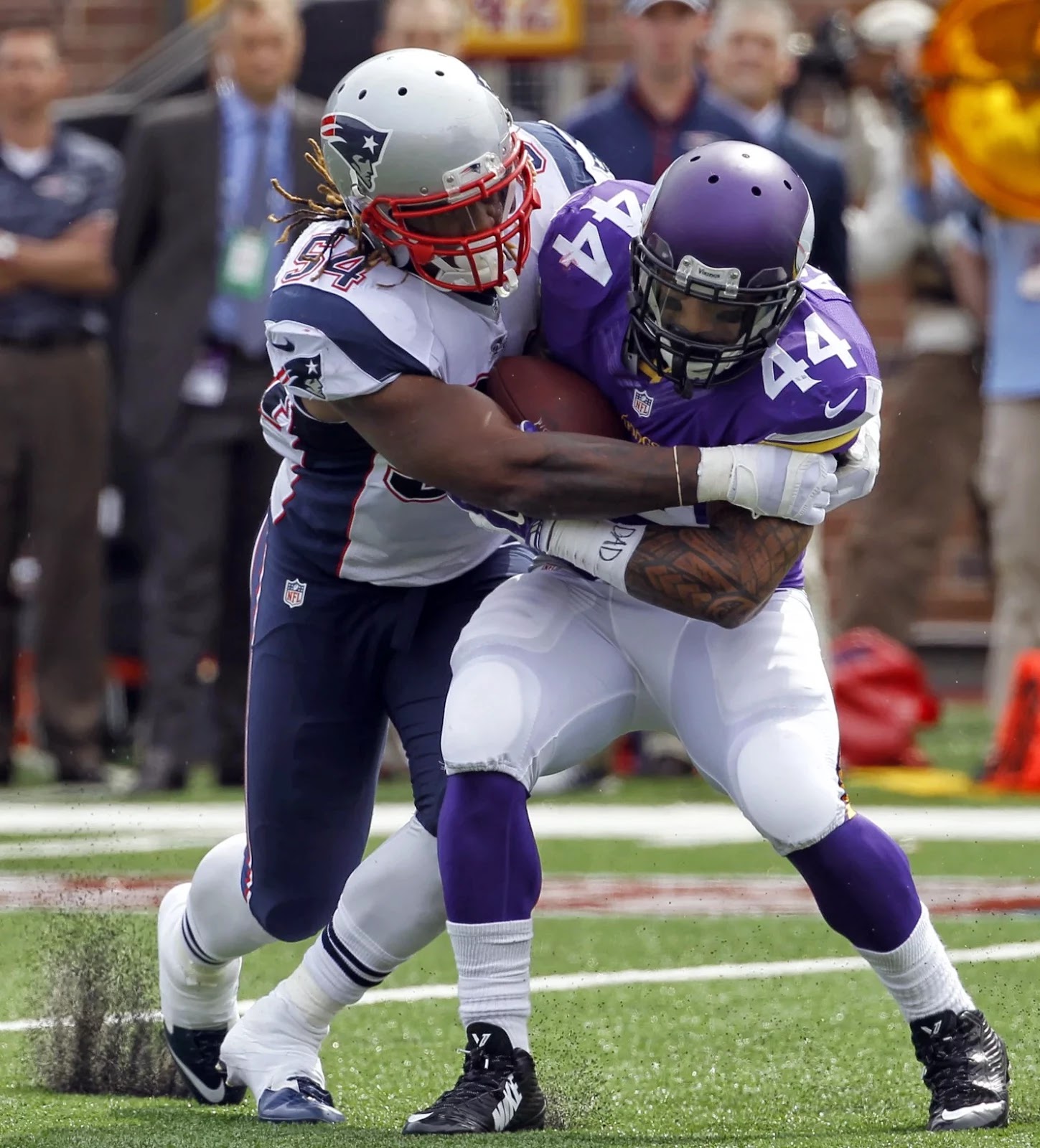 The weather was nicer, the opposing team was without their best player, and Chandler Jones. Those were the three biggest reasons that week 2 was so much more enjoyable for the Patriots than week 1.

Chandler Jones was clearly the player of the game Sunday. Could he BE any more of a playmaker? The defense looked shaky on the first series and Jones made the only good play, shedding his blocker and blowing up a reverse. He finished the day with a pair of sacks and a blocked field goal that he returned for a touchdown.

The timing of the block was especially crucial. Instead of a 17-10 game going into the half, it was 24-7. And the Pats would be getting the ball back after the break. Any momentum the Vikings had built was knocked down by Chandler Jones, just like he knocked down the ball.

It's been years since the Patriots have featured a playmaker in their front 7. They've had DBs who could make plays, they've had solid guys like Wilfork and Mayo up the middle. I'd say Mike Vrabel was the last true playmaker up front.

This is a big year for Jones. It's time for him to form his NFL identity. We've seen the athleticism, we see he can make plays that change the game. The question is, how regularly will we see that?

The offense wasn't very good. Granted, they did not need to be good against Matt Cassel and a Peterson-less Vikings offense. The Pats were 5 of 14 on 3rd downs. They went 3 and out three times. Apart from one or two drives, there was no rhythm.

Brady looked more comfortable. He stepped around inside the pocket more, so perhaps his calf is better. In week 1 he didn't move at all after his drop. In the past we've seen him take a step to the sides or forward to avoid pressure. He didn't do that in week 1, just dropped back and planted.

Offensively, this performance was reminiscent of the early 2000s. Brady only threw 22 passes (compared to 56 in week 1) for 149 yards. Only one QB in the NFL (Ryan Fitzpatrick, 139) threw for fewer yards than Brady in week 2.

The running game was efficient. Ridley ran for 101 on 25 carries. Not a bad day, but I still question his being used as a short yardage back. Right now the Pats don't seem to have anyone for short yardage situations. Vereen added 40 yards and the team ran for 150.

Julian Edelman was the key to the offense. He caught 6 passes for 81 yards and a TD. He's Brady's favorite target for short passes as well as deep ones. Including punt returns, Edelman was responsible for 156 total yards.

The Vikings aren't a good team. So the impressive nature of this win doesn't leave an impression that will last longer than a few hours. It's premature to say they've "addressed" the issues that undermined them in Miami. The Vikings didn't offer the challenges that the Dolphins did with their rushing game or their outside pass rush.

The Pats are 1-1, time to move on.  Starting Sunday against Oakland, they begin a stretch with 5 of 7 at home.

All wins are good wins (Bill Belichick now has 200 of them). And this win was necessary. Starting off 0-2 in September makes life in November and December very hard. This is the time to collect wins, secure a good playoff position, and work on your weaknesses. Winter is coming.