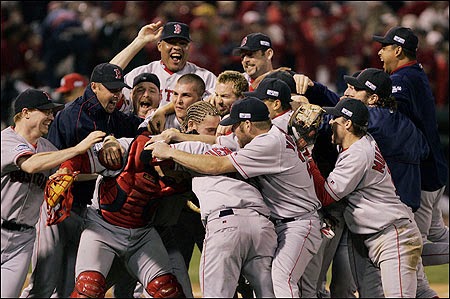 Thursday October 28, 2004. It was sometime around 2 in the morning in a dorm room, in a college town in Upstate New York. My body didn't feel like sleeping and my mind didn't feel like I was in New York. I was wide awake and my heart was in Boston. Hours after the Red Sox had won their first World Series in 86 years, I couldn't sleep, I couldn't stay put, I had to go home. And so did two other Massachusetts expats in my dorm, one from North Reading, the other from Newton. So that night/early morning, we made the 350 mile drive home.

I could wax poetically about the sun rising on a new kind of Massachusetts that day, but I'll skip all that. We had finally won the World Series, and it was a completely new kind of feeling as a sports fan.

In retrospect, we Red Sox fans had spent years torturing ourselves, in a Calvinistic hope (give credit to Dan Shauhgnessy for the comparison between Sox fans, and the predestination believing religious folks who colonized Massachusetts centuries earlier) that with each painful experience, we would somehow be rewarded with greater amounts of joy if, AND ONLY IF, our team ever won. The more pain we went through on Earth, the greater joy Heaven would bring. That was the hope.

I got home just as the morning commute was peaking. The Sox were the only story on the local news. The plane carrying the newly minted Champions landed at Logan. There were videos of grown men in business suits with briefcases, running alongside the team bus on its way to Fenway, jumping up and down for joy. There was a massive parade and I took the first Red Line train into Boston to get a good spot for it.

That unadulterated release of joy was something that had been building inside of us fans for years, even decades. And with each heartbreak, with each close call, with each Bucky Dent and Aaron Boone, the frustration built up. As the frustration and need for release increased, so did the feeling of gratification and joy that would be felt if we ever attained that release. In other words, we Sox fans had a terrible case of Blue Balls.

2004 was the epic release of that frustration, and also that joy. No sports moment will ever feel like that again.

That's why we no longer live and die with each pitch. That's why Red Sox fans went from religious zealots, to the people who only go to Church at Christmas and Easter.

John Henry, Larry Lucchino, and the Fenway Sports Group didn't help. Continuing the religious metaphor, imagine being the Pope the year after Jesus Christ came back to Earth. How would you get people fired up about anything?

You'd probably renovate the Vatican, and hire a bunch of high-priced Bishops and Cardinals (Renteria, Drew) to get people's attention.

I'll give Fenway Sports Group all the credit in the world for breaking The Curse. I'll also criticize them for not understanding what Sox fans were feeling, and still now not understanding how regular fans feel about this team. We couldn't have the same cultish devotion to the Sox after all our prayers had been answered. Henry and FSG didn't get that.

They didn't get a lot of things.

And perhaps most vexing of all, they kept Jerry Remy but dumped Jenny Dell. Giggly analyst who enabled his woman-beating son vs. attractive sideline fluff reporter who still had more interesting things to say than Remy. 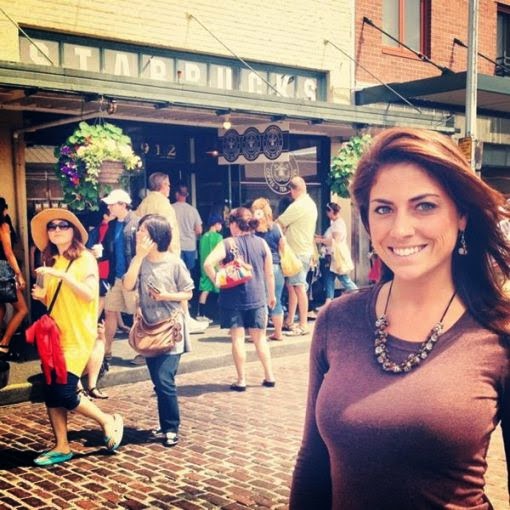 Seriously? NESN and the Red Sox decided to take her off the TV screen. Good call, guys.

Everything changed after the Red Sox won the World Series. Red Sox fans changed. We went from anxiously anticipating an overdue release, to being normal fans of a normal big-market baseball team. Ownership didn't want our fandom to change, though. They wanted the same rapt attention, the same hopeful highs and desperate lows. It's like we fans were bipolar before the Sox cured us by winning the World Series. Yet the owners still wanted to prescribe us Prozac and Paxil.

We didn't want that after 2004. We just wanted a baseball team. And that's all I want now. We don't need to have owners and GMs who spend on JD Drew but skimp on Jon Lester. We don't need lavish ceremonies where lions are released and someone pulls the string on Kevin Millar's back so he says something country.