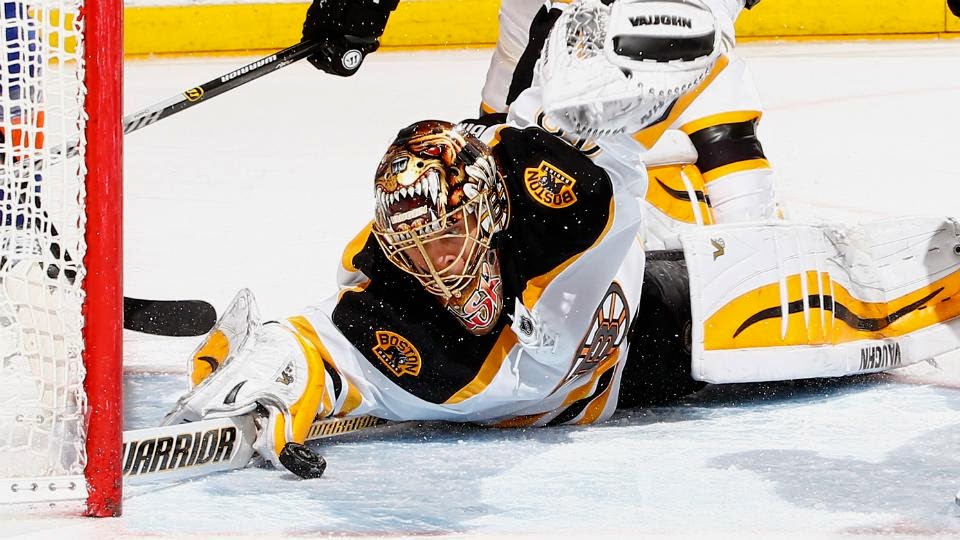 The Bruins might have made their final trip to Uniondale, NY (although, if the season ended today, the B's would be playing the Islanders in the first round). The Islanders are moving to Brooklyn next season, and the Bruins are trying to move up in the standings this season.

The Bruins won 5-2 behind a stellar performance by Tuukka Rask. But as stellar as Rask was, for some reason his efforts did not merit being named the 1st, 2nd, or 3rd star. Nevertheless, the Bruins goalie stopped 43 of 45 shots, a season high in saves. And one of those saves might be the stop of the season.

That save was a cold-blooded stoning. I can't even imagine how demoralizing it was for the Islanders. You have an open net to shoot at, and Tuukka Rask just goes "SUCK MY STICK!" Yeah, that's a big wide paddle, and he knows how to use it.

The Bruins have 33 games left on their schedule. They're 7 points behind Tampa Bay for the division and conference lead. That's a very surmountable deficit. Right now the focus has to be on making the playoffs. So for the Bruins it's all about points. Two points on Long Island is pretty good (the Islanders are 17-5-0 at home this year). Next the B's host the Kings on Saturday, who aren't very good this year and have only won 5 road games.

This is the time to accumulate points. The Kings struggle on the road, so beat them.