Why did the NFL wait until the Super Bowl to change how ineligible receivers are announced? 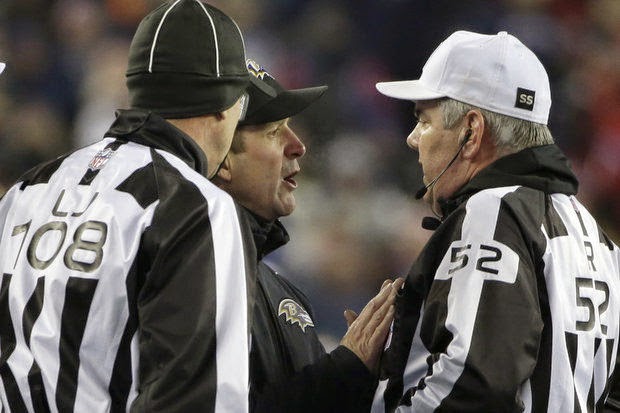 The Patriots used ineligible receivers and deceptive formations to defeat the Ravens in the Divisional Round, almost 3 full weeks ago. In immediate response to that, the League defended the legality of the Patriots' actions and did nothing to adjust the mechanics of officials for the AFC Championship game. Then DeflateGate happened. Then the NFL decided to make an adjustment to how ineligibles are announced. Odd, isn't it?

I have no issue with the League helping to clarify to the defense who is eligible and who is ineligible. I've heard Bill Belichick himself explain to media that it can be difficult and sometimes impossible to clearly hear what refs announce over stadium PA systems when you're on field level with 70,000 people screaming. So if the NFL wants to help the defense do their job, then so be it. Makes perfect sense.

What's odd is that there was no adjustment made for the conference championship games. And that the adjustment comes as the Patriots and the NFL find themselves in an adversarial position.

I'm not suggesting an anti-Patriots conspiracy in the aftermath of DeflateGate. But I do think DeflateGate might be a partial motivator of this change. The NFL wants this game on Sunday to be perceived to be as honest and clean as possible. While Belichick's ineligible trickery was within the rules, it worked because it was deceptive. In the wake of DeflateGate, the NFL might feel pressured (pun intended) to try to make the game appear to be as least deceptive as possible.

It's just so odd that this change wasn't made for the AFC and NFC title games. And that the League didn't wait until next season to implement it.

I'm trying to avoid jumping to conclusions, as everyone in sports media has been doing the last 2 weeks about Deflate Gate. I just wish/hope a reporter who has more access to decision-makers and league officials, can find it in themselves to ask the questions: Why now? Why not in the conference title games? If not in those games, why not next season?

I'm also very curious to know exactly when the NFL informed the Patriots and Seahawks about this new way of doing things. Was it before the teams started practicing for the Super Bowl? Or after? The answer to that question could either completely squash my interest in the subject, or intensify it. If the NFL told the teams early last week, then I'd accept that as fair and reasonable. But if it waited until the teams were in Arizona, and had already finished game-planning for the other, I'd question the timing.

There are few things in the Universe more annoying than a Patriots fan who is also a conspiracy theorist. The team here has won 3 rings, got caught cheating, and has still been close to winning a few more times, so whining and complaining should be kept to a minimum at all times. If the Pats lose on Sunday, I won't cry like the fans of so many other teams (See: Raiders). But the fact that the NFL decided to change how the officials announce eligible and ineligible receivers on the eve of the Super Bowl, and NOT for the AFC and NFC title games, strikes me as very odd.

Unlike some professional sports media in some recent stories, this amateur blogger won't jump to conclusions. Right now, I just have questions.