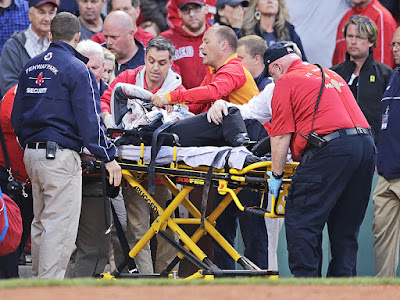 When Brett Lawrie's shattered maple bat flew into the second row at Fenway Park Friday night, it nearly took the life of Tonya Carpenter, a 44-year old resident of Paxton, MA, who attended the game with her 8-year old son.

In the aftermath of the near tragedy, questions arose about increasing protective netting to shield fans sitting closest to the field. There were also questions about the types of wood Major League players' bats are made of.

Lawrie's bat was maple. For most of the 20th century hitters preferred ash bats. Then in 2001 a maple bat in the hands of Barry Bonds was smashing baseballs and records. Since then, more and more players have opted for maple.

Maple bats may be better for hitting homeruns, but they're also more likely to shatter. When the insides of ash bats crack, hitters can feel it and see the wood starting to flake, so they can discard the bat before a pitched ball smashes it to pieces. Cracks in maple bats are more difficult to discover. Hitters don't realize that they're swinging a bat that has already cracked inside. Then ball hits bat, and bat explodes.

In short, ash bats crack, maple bats shatter. Broken ash bats get tossed aside whereas maple bats spray shrapnel around the field, and sometimes into the stands.

I'm not going to jump to a conclusion and blame the bat just because of some anecdotal evidence I've read. However, it is up to Major League Baseball to look into this with intense scrutiny, and if they find that a certain type of wood is a problem, take swift and decisive action. MLB investigated bats breaking in 2008, and took some measures to reduce broken bats. However, maple bats are still commonly used by hitters. And shattered bats are not uncommon occurrences.

The onus is on Major League Baseball to investigate this incident and all the questions it has raised, from bats to nets. And if maple bats are proven more likely to shatter, they should be banned. Period. No discussion, no debate, no typical "that's just baseball" reluctance to change. Brett Lawrie has already concluded his maple bat isn't a problem:

"I really don’t feel like it's necessary to change bats or anything like that. It's just one of those things that's part of baseball and unfortunately, everything is so close behind there and there's limited netting."

Major League Baseball needs to be more scientific and thorough than Lawrie was. If the NFL can spend $5 million to investigate the air pressure of footballs, MLB can spend some time and money to figure out if the game is as safe for fans and players as it can be.

Frankly, scrutinizing fan and player safety should always be a priority. It shouldn't take something like this to be an impetus to make the ballpark as safe as it can be to watch or play a game.

Thankfully the response of Fenway Park's medical personnel was rapid and pro-active. Thankfully ambulances at Fenway are stationed near canvas alley, which makes it easy to transport patients from the field. Thankfully those ambulances have quick access to the street (as we saw in the climactic shootout scenes of The Town). Thankfully Fenway is close to hospitals which have some of the best doctors in the world (Beth Israel Deaconess is less than a mile away). Thankfully Tonya Carpenter now has a good chance to recover.