When idiots conspire: How the meatheads running the NFL sabotaged their own conspiracy to hurt the Patriots 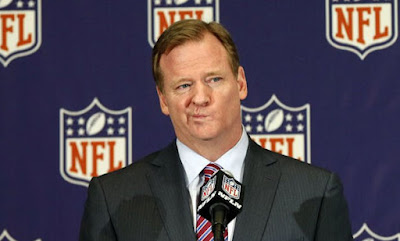 DeflateGate. Like Brett Favre, every time this story seems about to go away, it comes back.

The more we learn about DeflateGate, the clearer it becomes that high ranking NFL officials were hell bent on crucifying the Patriots. But they were careless and stupid with their conspiracy. And they underestimated the willingness of one man to fight; one of the most competitive and mentally toughest athletes in the history of sports: Tom Brady.

The false details in the Mortensen tweet launched this story into orbit. Despite pleas from the Patriots, the NFL didn't correct the leak. They allowed inaccurate information to be the basis of the biggest sports story of the year. The true pressure measurements were revealed 106 days later in the Wells Report.

But whoever leaked the inaccurate details to Mortensen, and whoever decided not to correct them, should have known that at some point the truth would come out. And people would ask questions about the NFL's motives behind the leak and their decision not to correct it.

The Mortensen tweet has become irrelevant as evidence against the Patriots. But in the case against the NFL, it's Exhibit A.

Why fill the Wells Report with so much shoddy science and desperately convoluted logic? The Wells-Pash Report didn't make the NFL's case, it undermined it. For example, referee Walt Anderson's recollection of which pressure gauge he used pre-game, was refuted based on a shaky scientific argument that relied on Anderson's recollection of the Colts' balls' pre-game pressures. So Anderson's memory was deemed unlikely to be true, based on the reliability of his memory. Why allow that to be published?

The League's motives in DeflateGate became clear when the Patriots and Tom Brady were severely punished. The team in part for previous rules violations (SpyGate). And Brady for being "generally aware," and for not handing over his cell phone.

Did Troy Vincent and the NFL do any research into their own precedents? Didn't they remember Brett Favre being fined $50k in 2010 for not turning over his cell phone? Or 2009 when a Jets equipment staffer was suspended for tampering with a kicking ball, but the kicker wasn't punished at all, or even investigated?

Why was the NFL so harsh with the punishments? Imagine if the NFL had just fined Brady. This story might have gone to sleep long ago. But just fining Brady was unacceptable. Why?

The motives for harshness and revenge against the Patriots are abundant. Goodell wanted to rebuild his reputation as League Sheriff. Former Jets president Mike Kensil's motives are obvious. The Ravens were infuriated about ineligible receivers the week prior. A number of other teams think the Patriots are pathological cheaters. Supported by a handful of owners, the same executives who leaked fake air pressures to Mortensen were likely the same people who pressured for and had the power to enforce the harshest possible punishment.

Brady was singled out because he was mentioned in texts. Because he refused to hand over his phone. And if he appealed, the NFL knew they could have their Meathead in Chief Goodell hear the appeal and then deny it. So he'd be compelled to settle (and admit guilt) or go all the way to Court.

This was their opportunity to sink their teeth in. So they did. Revenge, paranoia, reputation, all motives were satisfied by the severe punishments.

The NFL thought Patriots would accept it. And they were right about that. Bob Kraft accepted the loss of draft picks and the $1 million fine. Kraft's only recourse was to sue the League, and Goodell correctly predicted that Kraft wouldn't.

But the NFL miscalculated when they messed with Tom Brady. Big time. They completely underestimated him. Which is their most monumental mistake in this comedy of errors. Many have underestimated Tom Brady. And he's proven them all wrong.