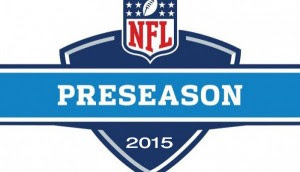 We're finally going to see football players on a football field instead of appearing in a court room. And even though the first pre-season game doesn't mean much, it's still football. And it will still be the Super Bowl Champions taking the field.

So here's a drinking game that will help you pass out before all the starters are taken out of the game. And if you actually play this game, you'll be on to alcohol poison, the emergency room, and then the morgue. Here it is...


Anytime this happens...
Touchback = 1 drink
Kick return = drink until the return is over
Turnover = finish your beer
The Patriots go no huddle = 1 drink per snap
A Patriots player you don't know touches the ball = 1 drink
An announcer is unsure of a player's name = 1 shot of liquor
Aaron Rodgers and Tom Brady are compared = drink until it stops
You think you saw Vince Wilfork, but you didn't = finish your beer, drink a shot, eat a turkey leg
The announcers stop talking about what's happening in the game = 1 drink


Anytime this is on screen...
A shot of a football or footballs = 1 shot of liquor
A ballboy = 1 drink
Bill Belichick = 1 drink
Tom Brady = drink for 12 seconds
The number 12 (including graphics) = 1 drink
Bob Kraft = 1 drink
Kraft talking to someone = drink the entire time he's talking
The words "Free Brady" = 1 drink
Any sign or shirt with a hashtag on it = 1 drink
The Lombardi Trophy = 1 drink per trophy
A ring = 1 drink per ring


Bonus Obscure Player Scavenger Hunt!!!
Drink every time these players are spotted on the field. And the first to announce they've spotted them also has the authority to dispense drink commands to others until the next player is spotted. And just like discipline in the NFL, appealing these drink commands is futile. So here are the players to watch for...

So there you go! Get lubed up responsibly folks!