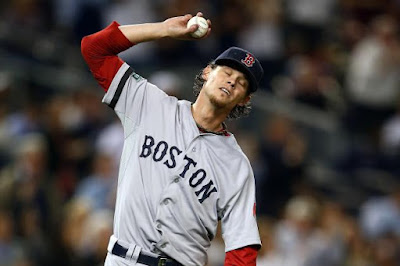 You thought that was a real headline, right? That's how fragile Clay Buchholz is. And the Red Sox have picked up his option for 2016, worth $13 million. Buchholz, when healthy, is incredibly streaky. He can rip off 8 to 10 Ace-like starts, then suck for weeks. From season to season, month to month, start to start, you have no idea which Clay Buchholz will show up. Here is the roller coaster ride of his ERAs for the past 5 seasons: 3.48, 4.56, 1.74, 5.34, 3.26. He's never had consecutive seasons with ERAs within 1 run of each other.

The argument for exercising the option is that $13 million isn't a ton of money, and it's only one year. And as I said, Buchholz when healthy is capable of brilliance. So why not? Minimal risk, potential for high reward.

But $13 million is too much for unreliability. I love low risk/high reward ventures. Not when the guy is as inconsistent as Buchholz, and ALSO as injury prone. The injury isn't even a risk, it's essentially a sure thing.

Another reason to not want Buchholz is that due to he unreliability, you're going to have to make sure you have 6 potential starters available. Either that or try to acquire one in June or July when his arm breaks down. And good luck finding a replacement for him if he falls apart in September. By keeping Buchholz, it forces you to also get some form of insurance.

It comes down to this: If he were a free agent, would you want to spend $13 million on him? I wouldn't.

Even as a back of the rotation guy, he's too unreliable. I'd rather have a mediocre innings eater that I could depend on to keep the team in games and preserve the bullpen. Give me 28 starts and 160 innings of decent pitching. With Buchholz it's 10 to 29 starts, and 100-200 innings, some great, some awful.

In 4 of Buchholz's 18 starts last season, he failed to go 5 innings. It was 6 times in 2014. About every 5 starts he'll drop a turd on the mound and you'll have difficulty clawing back to get into the game. Not to mention tax your bullpen in the process.