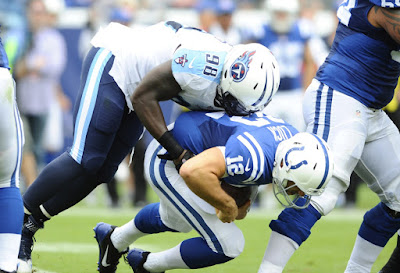 It's sort of like arguing with someone online, and correcting their grammar or spelling. Once you do that you'd better make sure you use the right your/you're, it's/its, and then/than. And if you don't, every little mistake of yours is fair game.

Once you open that door of publicly tattling on another team for possibly breaking a rule, you'd better make sure you follow the rules to the letter. All the rules. Each and every stipulation in the book. Such as fully disclosing the nature of your most important player's injuries. As the NFL says "This policy is of paramount importance in maintaining the integrity of the game."

Integrity. The Colts violated a rule that is of "paramount importance" to the game's "integrity."

And it's not just the integrity of football games being jeopardized by the Colts' deception. With the explosion of daily fantasy sports on sites like Draft Kings and Fan Duel, where millions of dollars change hands every week, the accuracy of injury information is now similar to the accuracy of publicly owned corporations issuing earnings reports. Huge amounts of money is at stake. And publishing false injury information is like a company failing to report a loss.

How many people added Andrew Luck to their teams in the past few weeks, under the pretense that he had recovered from an arm injury but was otherwise healthy? What about TY Hilton or Donte Moncrief? How would knowledge of his rib injury have affected people's strategies? And might Draft Kings and Fan Duel have possibly modified their salary cap number for Luck if they'd known the truth?

And who had inside information about the true nature of Luck's injuries? Did any of them have Draft Kings or Fan Duel accounts? Do their friends or relatives?

In this absurdly litigious society, the Colts have opened themselves up to huge legal action. And if you picked Luck for your fantasy team, or might have picked him at a lower price, then you should call your lawyer and file suit.Take it all the way to the 2nd Circuit if you have to.

The rules are the rules, Colts. You're the ones who made a big public deal about the rules a few months ago. Which was especially pathetic since the crux of the story was that the "illegal" footballs were removed from the game, which is also when you started getting stomped on.

You couldn't beat the Patriots on the field, so you decided to beat them with the rule book. And now we see that you suck at that too. Almost as badly as you suck on the field.