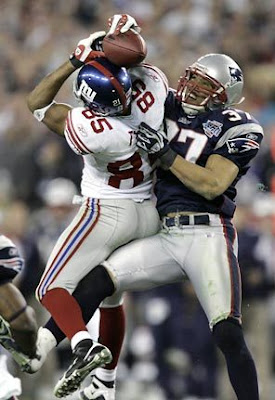 Throughout the week, few people seemed to actually talk about this game in 2015, instead focusing on games played 4 and 8 years ago, by almost completely different sets of players. For the Patriots, this is a tough road game against a good opponent. And they probably won't make nervous mistakes like so many Pats' opponents have this season. Then again, a 5-4 record in the NFL this year isn't very impressive. Being slightly above average in an incredibly below average league is like repeating the 4th grade and then getting a B-. Who cares?

Speaking of who cares, who cares about my game analysis? Let's get to the drinking game!


Anytime this is on screen:
Fall foliage = 1 drink, bonus points if it's pumpkin flavored
DraftKings logo = 1 drink
Highlights of a Super Bowl = drink for the duration of the highlight, then throw up if it was against the Giants
Roman numerals = 1 drink per set of numerals
Highlights of a Giants receiver making a ridiculous catch = drink entire beer, take a shot, snort a line of oxy
Clip of a former Patriots receiver named Wes dropping a catch = finish your beer, pop a Molly, and sign with the Rams
Bill Belichick as a NY Giants coach = drink a giant sized beer, like those Fosters beers
60 Minutes promo = 1 drink per clock tick
Jason Pierre-Paul's bandaged hand = 1 drink
Graphic about Pats' O-line injuries = 1 drink per injured player mentioned
A sign about DeflateGate = 1 drink
The New York skyline = 1 drink
The disgusting wastelands of north New Jersey = 1 drink
Bob Kraft = 1 drink
Kraft talking to someone = drink while he's talking

So enjoy the Pats-Giants game, get lubed up, and please don't play this drinking game because you'll probably die.