Patriots dynasty is over, yet again 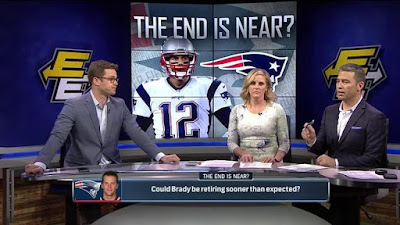 Texans 28, Patriots 24. And with that, the Patriots' run of success has come to an end. It's over. The dynasty is done. All good things come to an end. The defense isn't as strong as we thought. The offense is shriveled and flaccid. They can't even figure out the field goal kicker. Cue the hearses for the funeral procession.

We know with certainty this is the end because we've seen the end so many times. Perhaps the most remarkable thing about the Patriots' dominance of the 21st century is how many times their reign has ended and the team has fallen apart.

It came to an end a month ago in Baltimore. And of course, last winter it was all over in Kansas City when Damien Williams scored with 2:03 left to beat the Patriots in the AFC Championship game. Before that, the dynasty fell apart when the Pats were forced to go on the road to win the AFC, something they hadn't succeeded at in years. There was no way they'd win.

The Miami Miracle also ended the Patriots' 2018 season, and thus also their string of triumphs. Before that, losses in Tennessee, Detroit, and Jacksonville each ended the 2018 season as well. The 2018 Patriots were knocked out of contention about 6 or 7 times in 2018.

Of course, the Patriots never recovered from losing to the Eagles in the Super Bowl. And since parting ways with Malcolm Butler, the defense just hasn't been the same.

The Falcons embarrassed the Patriots the year before that. And that 2016 regular season was the end of the Pats' dynasty because they'd have to play without Brady for 4 games, and also there was that irreconcilable turmoil between Kraft/Belichick/Brady over the fate of Jimmy Garoppolo. All the king's horses and all the king's men couldn't put the Patriots dynasty back together again.

Ever since losing to the Chiefs in September 2014, the Patriots just haven't been "Good anymore." They've collapsed about a dozen times since then. Maybe more. Just like when 2002's 9-7 record showed that the year before was a fluke. Or in week 1 in 2003 when Tom Jackson revealed to us that the Patriots "hate their coach."

Now the AFC baton is being passed to the Ravens and Chiefs. Just like Mark Sanchez and the Jets took it in 2010 and went on to glory. Or the Colts took it and had a streak of banner years with Manning and Luck. Or the year-in year-out success of the Broncos. Or the way the Steelers have been able to get past the Patriots both on the field and in their own minds.

People have been digging graves for the Patriots dynasty ever since they picked them to lose to the Steelers and Rams in 2001, or thought the Patriots were done winning in that stretch from 2005 to 2014.

At some point the Patriots dynasty will die. And maybe it's now. But the people predicting this death have spent years, even decades digging empty graves for the Pats. So if this is indeed the end, I'll enjoy an Irish wake and revel in the good times, and the unparalleled competitiveness of this team. I'll pay my respects and congratulate myself for only mourning the dearly departed just once, not 20+ times.

And if this isn't the end, I'll smile like the insufferable prick I am as I watch the exhausted haters and befuddled fools start digging the next set of graves for this team.
Posted by RobZ at 2:25 AM