My favorite defensive performance of the season so far 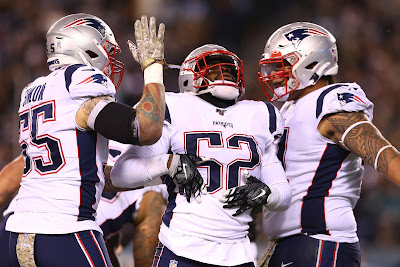 The first few weeks of the season, the Patriots defense looked like an all-time great unit: Picks, fumbles, sacks, shutouts, scores. But it was mostly against bad QBs and bad teams. I'm not taking anything away from the Pats' D, but is it really a huge achievement to get 4 picks against the Dolphins?

What I've been wanting to see from this defense is if they had the ability to consistently make tough stands against decent offensive players. And that's what they did Sunday in Philadelphia.

The Eagles only had two drives that lasted more than 5 plays. The Patriots forced four 3-and-outs. They held the Eagles to drives of under 20 yards seven times. Cameron Johnston has a season-high 8 punts.

Last night I thought this win was ugly, but as I look back on the defensive performance, it's very attractive on that side of the ball: five sacks, a forced fumble, holding the Eagles under 100 rushing yards, under 200 passing yards. And it's not like the offense was putting the defense in great situations either.

So more than any other defensive performance this season, the 60 minutes in Philly yesterday impressed me the most.

But you're only as good as your next 60 minutes, which will be against the even better offense of the Dallas Cowboys.