ONLY ONE LOWELL LEFT IN MASSACHUSETTS

The Red Sox traded Mike Lowell to the Texas Rangers for minor league catcher Max Ramirez. The Sox will also send about $9 million of the $12M Lowell is due to be paid.

Who is Max Ramirez? In 76 Pacific Coast League (AAA) games last year, he hit .234 and 5 homeruns. He has a chance to be the AAA PawSox catcher. Emphasis on the word "chance." He is a throw-in. The Rangers are basically taking $3 million off the Red Sox' balance sheets. 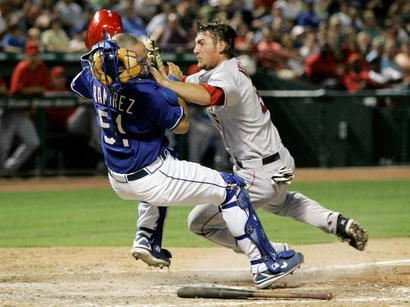 This deal only makes sense if the Red Sox acquire a corner infielder. Saving $3 million in exchange for replacing Lowell with Varitek (the domino line would go Youkilis replacing Lowell at 3rd, then V-Mart replacing Youk at 1st, then Varitek replacing V-Mart at catcher), is simply a bad idea.

The trade needs approval from multiple people. Because of the money involved, The Commisioner needs to approve it. The Rangers are also giving the oft-injured Lowell a physical.

Adrian Beltre is the popular rumor to replace Lowell, and Jesus Christ I hope that remains nothing more than a rumor. Beltre hit .265 last year with a pitiful .304 OBP. He belted a whopping 8 homeruns in 111 games. No thank you.

Miguel Cabrera is another rumored deal, and I think the most likely at this point.

Still, it's strange to make a deal that depends on a POSSIBLE future deal in order to make it work.