KG FOR THE W 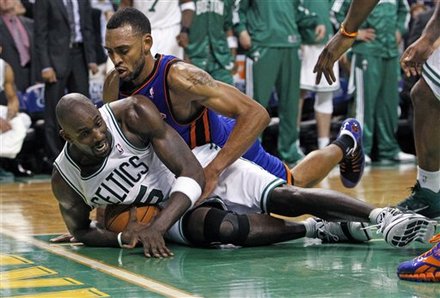 In both these games, the Celtics and Knicks have been essentially equal for 47 minutes. Then in those final 60 seconds, the Celtics are clearly the superior team. And while I still have some concerns about the C's, both in this series and in any future series, they've proven to be far more clutch than the Knicks.

It was Ray Allen on Sunday. Last night it was Garnett. Having so many experienced, big game players is quite a luxury. One that most other teams don't have. KG's lead-taking shot, followed shortly by his game-winning steal was quite literally the difference in this game. The difference was clutchness.

We shouldn't dismiss the previous 47 minutes of play. Rajon Rondo deserves praise for his 30 points. And when Ray Allen got shots, he nailed them. On the other hand, there were some worrying aspects to this game.

The Knicks only got 18 minutes from Stoudemire, and still this game was evenly matched. Carmelo exploded for 42. And the Knicks collected 20 offensive rebounds. A huge chunk of their offense came from second chance baskets.

I don't see New York coming back from 2 games down. They'll win one or two in this series, but they're not poised or refined enough to do more than that. However, the Celtics long-term prospects aren't good unless Rondo continues to rampage, Allen continues to drain threes, the bench contributes more, and the overall defense improves.