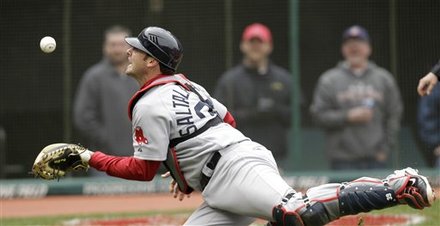 The Sox finally got a Quality Start. Jon Lester was superb, throwing 7 shutout innings, working his way out of what little trouble he found himself in. He just didn't get any support. And now the Red Sox are off to their worst start since 1945. And I'm starting to worry.

The bullpen once again failed the Sox. Give Cleveland credit for manufacturing a run, but Bard's inability to throw strikes helped Manny Acta do things like call for a squeeze play.

The only hitter in the lineup doing their job is Adrian Gonzalez. The Sox are getting baserunners here and there, but can't get hits to knock them in. They're now 7/44 (.159) with runners in scoring position this season. They're only hitting .181 as a team, so it's not like they're only struggling in clutch situations. They're struggling to hit in every situation.

Youkilis is pressing too hard. Maybe the thumb is still bothering him, but I think a combination of rust and pent up frustration is why he's swinging so freely, and why he's dropping balls in the field. Remember, he hadn't played a competitive game since August 2nd. He's not exactly mild mannered, either. I think he's trying too hard to force the hits.

The Sox are failing at even the little things. Darnell McDonald's moronically wide turn of 2nd base that ended this game is an excellent example. And Varitek can give all the excuses he wants, but he made a huge mistake last night in not tagging Buck.

The Red Sox need to turn things around at Fenway. It's Opening Day tomorrow, and time to start the season over again. Unfortunately, John Lackey is pitching. He faces Phil Hughes, who struggled in his first start.