BRADY BUNCH BACK IN ACTION 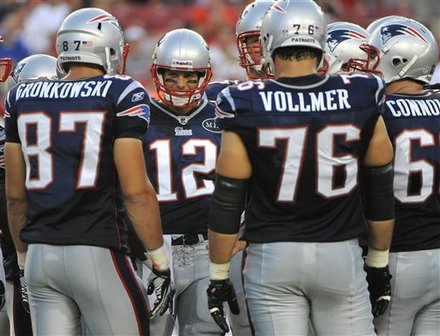 I'm excited. I know it was a preseason game. I know it was against the Buccaneers. But it was exciting just seeing Tom Brady throwing passes in a game for the first time since that calamity against the Jets, especially with that lockout thing in between.

Brady was 11 for 19 for 118 yards, 2 TDs, and 0 picks. That's a 111.3 rating, by the way. He connected with Aaron Hernandez for a touchdown, and with Ochocinco. It was one of only two passes caught by the receiver formerly known as Johnson.

The Patriots amassed 200 yards on the grand, thanks mostly to Stevan Ridley's 84 yards on 14 carries. Ridley also caught 3 passes for 27. BJG Ellis ran for two scores.

If the Patriots can get a solid, reliable running game, it will help their passing so much. With tight-ends, and medium-route receivers like Welker, Branch, and Ochocino, it's a real luxury to be able to run the ball on 1st and 2nd downs, and create 2nd & 6, or 3rd & 2. That just opens the whole playbook for Brady.

The Patriots look good, but is that a surprise? This team won 14 games last year. We know they have the talent to make the playoffs and contend for a divisional title. So far, they look a little better than last year.

Maybe that's because we're anticipating guys like Woodhead, Hernandez, and Gronkowski to be good. They were surprises last year. They all have expectations now. Maybe because Ridley is having a good pre-season. Maybe because the young players are a year older and wiser. Maybe because the Pats added Ochocinco.

I haven't been this excited for a Patriots season to start since 2007.
Posted by rob at 9:30 AM